They have come from beyond to save our world from disaster: refugees offering their help, and possessing the power of an entire army! Make way for Erebus, master of the mind, the powerful reptilian Draco, and the technomantic skills of Ironmonger. The Starbreed are here to help, all we have to do is let them… Includes Part One of The Secret of the Starbreed, a Mutants & Masterminds adventure!
Mutants & Masterminds Threat Report #47: The Starbreed, Part One (PDF)

The world is full of possibilities, imagine if you could explore all of them. Professor Zed did more than imagine, he made it happen, opening the way to an omniverse of infinite parallel realities. Now he’s back, having looted them of the secrets that make him a power to rival any in this world. Can the heroes stop him? They won’t be able to do so the same way twice…
Mutants & Masterminds Threat Report #46: Professor Zed (PDF) 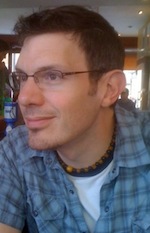 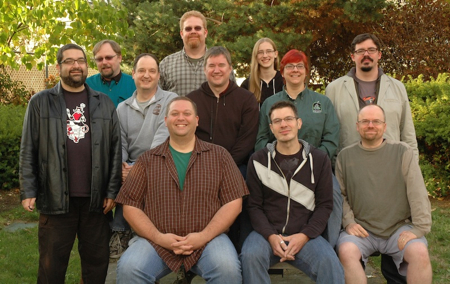 A shadowy killer stalks the streets and towers of Emerald City, striking at will. Who is the mysterious master of the secret Jade Spider Style of martial arts, and can the heroes learn what they need to know to stop him, or will they too fall victim to the Jade Spider’s silken strike?
Mutants & Masterminds Threat Report #45: Jade Spider (PDF) 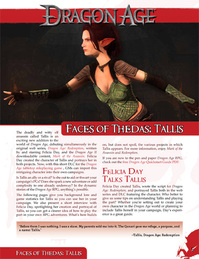 Dragon Age developer, Will Hindmarch, here to announce a free bit of DLC for our Dragon Age RPG. It’s Faces of Thedas: Tallis (PDF), featuring an exclusive interview with Felicia Day, writer and star of the web series, Dragon Age: Redemption, plus RPG stats for Tallis, Day’s character from the series and the Dragon Age II DLC, Mark of the Assassin!
As a gamer who’s played a lot of RPGs adapted from TV, movies, and games, I always want to ask actors and writers about the characters they portray so their perspective can inform roleplaying at my game table. When I heard that I’d be the new shepherd of the Dragon Age RPG, just as Redemption and Mark of the Assassin were about to debut, I figured I had to pursue the chance to get Felicia Day’s insight on Tallis, a character she created. As a writer, actor, and a gamer, Day is a rare expert on how those roles overlap–and how they differ.
Plus, Tallis is such a terrific character for inspiring and complicating adventures that I thought she’d be a great addition to Dragon Age RPG campaigns all over. I hope you enjoy this free RPG DLC! Back to work for me!

From ancient Olmec ruins arises an alien threat, buried for thousands of years. Ancient and undying, he is… Ku Tu the Eternal! Once god-king of an ancient empire, the cosmic-powered menace intends to rule once again, aided by his flying stone heads and his savage pack of jaguar-men!
Mutants & Masterminds Threat Report #44: Ku Tu the Eternal (PDF)

We enjoyed hiring new staff so much last month that we decided to do it again!
Joe Carriker is our new Song of Ice and Fire Roleplaying (SIFRP) Developer. He was most recently at CCP/White Wolf working as a content developer on the upcoming World of Darkness MMO RPG. Before that he was the developer for Vampire: The Requiem and the Scarred Lands, so he brings a lot of experience to the table. Mutants & Masterminds fans have seen his work in the Book of Magic. Now he’s immersing himself in Westeros and helping us push the SIFRP line into the future.
Welcome, Joe. You’re a Ronin now!