This week is all about Gen Con here at Green Ronin. Some Ronin are already in Indy, some have just cleared airport security checkpoints (at least we assume they did), some are still packing nerdy t-shirts and wondering where that flight info printout disappeared to, and some are revving up their engines for a long drive. Gen Con is one of two times a year that all of Green Ronin gathers in one place from all around the U.S., and we’re always energized by it.

This year you’ll find us in Booth 1201, right by the middle exhibit hall entrance, next to Fantasy Flight. If you’re at the show, please do come by to see us! We’ll have a limited number of copies of the SIFRP Campaign Guide: A Game of Thrones Edition, as well as Threat Report and of course the rest of our books and boxed sets for Dragon Age, A Song of Ice and Fire Roleplaying, DC Adventures, and Mutants & Masterminds.

Due to the show, we won’t be posting a new Power Profile or Ronin Round Table this week.

Con season is in full swing now, with GenCon next week and PAX two weeks after that. Before we get sucked down that rabbit hole though, I thought I’d take the opportunity to talk about our schedule for the rest of this year. Based on how things have gone, and taking into account the always fickle cash flow, we’ve had to move some books around. Below you’ll find the current schedule for our print products, but before I go on, let me issue one caveat. Several of these books are licensed and while we have budgeted time for approvals, it is never a sure thing. Just bear that in mind as we move ahead.

Threat Report: This excellent collection of new villains for Mutants & Masterminds is in stores now. Huzzah! We’ll also have it at GenCon, of course.

SIFRP Campaign Guide, A Game of Thrones Edition: We will have a limited number of copies of the revised Campaign Guide at GenCon and it should be in stores late in August. Thanks to our eagle-eyed forum regulars, we were able to catch and fix errata before the book went to print. Thanks for that!

SIFRP Night’s Watch: What happens when you take the black? Find out in this exciting new sourcebook for A Song of Ice and Fire Roleplaying. It includes new options so you can run campaigns on either side of the Wall. Night’s Watch is laid out and text approved. Once the art is approved, we’ll release the PDF and start the pre-order. We are shooting for a September release.

Supernatural Handbook: This is our Halloween treat! The Supernatural Handbook is a sourcebook of heroic horror for the Mutants & Masterminds Superhero Roleplaying Game. It lays out the elements for a successful M&M game in which the strange and paranormal are true and a few lone heroes struggle against the Things That Go Bump in the Night. The Supernatural Handbook includes detailed information on character creation, horror-themed series, and adventure design, and a complete system for building your own supernatural menaces for your heroes to hunt (or to hunt them…). You’ll find hero and villain archetypes like the Curse-Burdened Adventurer, Noble Monster, Dark Emissary and Inhuman Juggernaut. The book also introduces the organization ARCADE (American Research Center for the Arcane Defense of Earth) and its agents, who wage a secret war every night. Join the fight against ancient evils and occult menaces with The Supernatural Handbook! Look for it in October.

DC Adventures Universe: The fourth and final DC Adventures book takes you on a tour of the DCU and includes even more characters. This is a fantastic resource for your DC campaigns. Scheduled for release in November.

Emerald City: We’ve scheduled Emerald City, the newest addition to the Mutants & Masterminds "Freedomverse," for a November release. This is a product that’s gone through some changes but all for the better. The plan now is to release Emerald City as a slipcase with three books and a poster map. The books are a Player’s Guide, Secrets of Emerald City, and the full length adventure Emerald City Knights: everything you need to run an epic campaign!

Dragon Age, Set 3: Last but by no means least, we come to my baby, Dragon Age. This set includes the rules for characters level 11–20, as well as a plenty of new source material about Thedas and a new adventure. Since it’d be impossible for us to print this at the same time as Emerald City and DC Universe, the plan is to release the PDF and start the pre-order in November and then release the physical product in January.

I know this is not ideal and that the Dragon Age fans have been waiting a long time for Set 3, but the January release will actually be good for the game. As you may or may not have heard, I filmed two episodes of TableTop, Wil Wheaton’s excellent show on the Geek & Sundry network. I ran Dragon Age for Wil, Chris "The Nerdist" Hardwick, and two mystery guests. My episodes will air in February and they close out Season 1 of TableTop. Getting Set 3 out right before these episodes will ramp up the Dragon Age excitement at the right time, and then in February we’ll have the complete game available for those who watch the show and join us in the shadows where we stand vigilant.

So that’s our plan moving ahead. As you can see, we’ve got plenty of gaming goodness still to come in 2012! 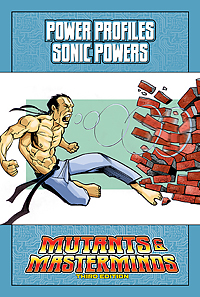 From music with charms to soothe (or command) to a shattering hypersonic shriek, Sonic Powers looks at abilities which generate and control sound. Flatten foes with sonic blasts or sneak up on them cloaked in silence, shape sound into solid constructs or even transform yourself into "living sound" with all the powers of this profile. For M&M Third Edition. 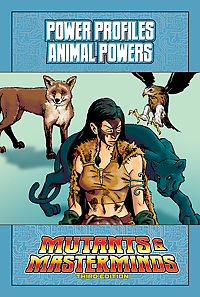