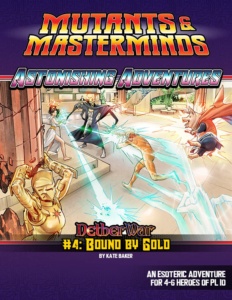 In the latest installment of the NetherWar, Bound By Gold, the heroes efforts to stop Toy Boy’s rampage have inadvertently released the former Master Mage: Malador the Mystic, and now the dread Atlantean intends to bind the spirit of his dead rival, Adrian Eldritch, into an undead servant to aid his conquest of the world! With so much at stake, the heroes find an unlikely ally who has an agenda all her own. But the mysterious Dark Lady still works behind the scenes. It’s a three-way magic free-for-all of diabolical villains, with the heroes—and all of Freedom City—caught in the middle!

Written by Kate Baker, Bound by Gold is a mystical adventure series for a team of four heroes of PL 10. The adventure continues the NetherWar campaign arc for Mutants & Masterminds, Third Edition.

Astonishing Adventures bring exciting new adventures for Mutants & Masterminds, Third Edition to you every single month, complete with all the action and villains you need to bring the story to life!

Be sure to check out the rest of the NetherWar series, including the free Series Guide!

And finally, tune in to our Facebook Page each week for Mutants & Masterminds Monday! LIVE. Videos will also be made available after they air on our Youtube channel.