Buccaneers of Freeport is now available in PDF format our Green Ronin Online Store. This game sourcebook fully details eight pirates, many new, some infamous, in lavish detail. Each entry explores the rogue’s history and his or her goals and agendas, while hinting at the curse that keeps them at sea and the treasures they guard. In addition, the pirate’s key crewmen receive extensive attention, presenting them in all their cunning and brutality to breathe life into the thrill-seeking corsairs. Finally, the pirate ship, allies, and enemies round out the chapter, culminating with a campaign framework to help you build adventures centered on these various characters. This book is free of stats, so it works with any roleplaying system, such as our own True20 Adventure Roleplaying.
Add these scurvy dogs to your campaign today!

The print version of the d20 Freeport Companion is now shipping from our Green Ronin Online Store. Pre-orders will be showing up on your doorsteps soon, and you’ll also start finding the book on store shelves. There’s never been a better time to be a fan of Freeport!
d20 Freeport Companion

The d20 Freeport Companion is now available in PDF in our Green Ronin Online Store. This massively crunchy tome brings you d20 rules for the people, monsters, magic, and more of Freeport, the City of Adventure. This is the last product we will do in support of the version 3.5 of the d20 System, so whether you’re a fan of the system, the city, or both, you’ll want to pick up this companion to Pirate’s Guide to Freeport.
You may now also pre-order d20 Freeport Companion in print, to ship for delivery as close as possible to when the book will appear on store shelves.
As a special deal, if you order the print version of d20 Freeport Companion, upon checkout you’ll be offered the PDF version at 50% off! To get this deal, make sure the print book in is your shopping cart when you check out, and then accept the special offer for the PDF when it comes up. (If you just put both the print and PDF versions in your shopping cart and check out, you will be charged full price for both.)

Cults of Freeport is now available in PDF format in our Green Ronin Online Store.

On the surface Freeport is a pirate city gone legit, but in reality it is still a place of terrible secrets, foul plots, and dreadful gods. Cults of Freeport peels back the facade of the City of Adventure to take an unflinching look at its most disturbing denizens. This sourcebook describes a dozen despicable cults in lavish detail, from their goals and motivations to their tactics and impact on the city. In addition, each entry includes an overview of cult’s membership and recruitment policies, as well as a myriad of plot frameworks to help you feature these groups in adventures of your own design. As with The Pirate’s Guide to Freeport, Cults of Freeport does not include game statistics of any kind, so you can use it with the RPG of your choice. The Brotherhood of the Yellow Sign was just the beginning. Learn the unspeakable truth about the city’s corruption in Cults of Freeport!

Our production department has sent around the final cover image for our upcoming book Cults of Freeport. Serpent People, mysterious tentacles, cultists… What’s not to like? Click the below image to get a closer look: 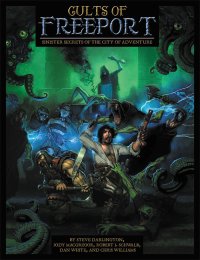 Dark Wings Over Freeport is now available in PDF format from our Green Ronin Online Store.
A new day may have dawned in the City of Adventure, but old evils still haunt Freeport’s streets. When beggars start disappearing, the crime lord Finn grows worried and coerces the heroes to look into this potential disaster to one of his more lucrative operations. As the adventurers soon find out, the perpetrator is no simple murderer or overzealous watchman. What begins as a simple stakeout and investigation reveals a horrible plot involving terrifying demons, fiend lords, and a burgeoning cult that threatens much more than the crime lord’s profits. This Bleeding Edge special celebrates the release of the Pirate’s Guide to Freeport. Dark Wings Over Freeport can be run as a stand-alone adventure or used to launch a brand new campaign set in the popular City of Adventure. Like other offerings from this series, Dark Wings over Freeport supplies thrilling environments, colorful NPCs, and deadly combats, promising to push your games to the Bleeding Edge of adventure.
Includes both d20 and True20 stats!
Dark Wings Over Freeport PDF

Green Ronin Publishing and our president and show host Chris Pramas are proud to present Episode 1 of our new Green Ronin Publishing Podcast.
Follow along with Chris and special guests Steve Kenson and Robert "Dr. Evil" Schwalb as they discuss the many cool products that we’ll be debuting at this year’s Gen Con Indy and give special attention to the Pirate’s Guide to Freeport and Paragons, our new campaign for Mutants & Masterminds.
The show clocks in at just over 30 minutes, and is a 27.7 MB download.
Listen to Episode 1 here:

We’ve posted another PDF Preview from Pirate’s Guide to Freeport. This excerpt from the book discusses The Serpent’s Teeth, the island chain where Freeport is located. It includes tons of great information and a really cool map.

"Freeport does not exist in a vacuum. Life (and death) in the Freebooter’s City is defined in large part by its location. Perched on the shattered remains of Valossa, the citizens of Freeport contend not only with each other for survival, but with the natural (and unnatural) hazards of life on the tips of the Serpent’s Teeth. While Freeport is the only city in the Serpent’s Teeth, it shares the islands with a variety of smaller towns and outposts, and the pirates and traders that sail the sea. And in the jungles and caves of the islands, beneath the waves, and in the ruins of the serpent empire, there are legends, treasures, and horrors beyond human understanding, waiting to be discovered—or unleashed."