Green Ronin is (still) looking for d20 fantasy adventures. If you are a designer and you think you can meet Green Ronin’s standards of excellence, we want to hear from you. Our submissions page has full details.
More About Our Call For d20 System Adventures 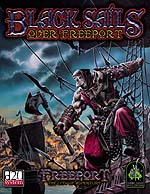 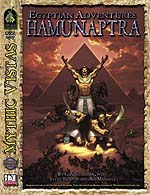 Next month it’ll be 5 years since I started Green Ronin Publishing. At the
time it was a strictly nights-and-weekends gig for me and there was
no formal staff. Today we have over 70 titles in print, a staff of
seven full time employees, and a great lineup of products for the
coming year. So first let me say thanks to everyone that has
supported Green Ronin over the years. Thanks to the fans, the
retailers, the distributors, the conventions, the Web sites, and the
magazines. Thanks to The Game Mechanics, Dog House Rules, Human Head
Studios, Osseum Entertainment, and all the talented freelance
writers, artists, cartographers, and editors who work with us. We
wouldn’t be here without you.

I’m going talk about what we’ve
got coming up this year, but before I do that I want to tell you
about something we’re trying. To date Green Ronin hasn’t done much
with electronic products but that’s going to change this month. We’re
going to be releasing some of our books in PDF form before doing a
print version. This has worked well for some companies and we think
there are enough fans of electronic publishing out there to make it
worthwhile. Our first release is going to be the Advanced
Player’s Manual and we’ll be releasing a PDF of the Advanced
Bestiary at the same time. The APM will go to print shortly
thereafter, so it’ll be available whatever way you want it. If this
goes well, we’ll try it with other lines as well. We’ll also be
releasing PDF of select older titles, as well as finishing our 3.5
update and revision of the Freeport Trilogy. Our PDF
products will continue to be available through rpgnow.com.

As far as new products go, let me start with Blue Rose.
Our romantic fantasy RPG is finished at last and heading to print
shortly. We’ve been running a series of previews over on
blueroserpg.com, so check that out if you haven’t. There’s
already a fast play PDF available, which gives you an overview of the
game and setting, as well as an introductory adventure with
pre-generated characters. Whether you’re a fan of romantic
fantasy fiction or just someone looking for a stripped down and
streamlined version of the OGL rules, we think you’ll find Blue
Rose worth the wait.

This year will see the releases
of the long anticipated Advanced
Player’s Manual and Advanced
Gamemaster’s Guide.
These books form the core of a new line designed to push the
boundaries of d20 into new territory. The Advanced series will
continue with more new material, and by folding in the Races of
Renown and the Master Class lines. In essence the Advanced series is
becoming our core d20 fantasy line. Once the first three books are
finished, we’ll be continuing on with the Advanced
Race Codex,
a massive sourcebook compiling and revising some of the best material
from Races of Renown while also offering a bunch of new material for
halflings, gnomes, humans, and yes, even half-elves. But that’s not
all. Later this year, we’ll follow up with a book doing the same for
the Master Class series. And along the way we have a few surprises
that are guaranteed to make your familiars sweat.

Mythic
Vistas remains its own line and will continue to be where we do
campaign setting material (including Freeport). The biggest Mythic
Vistas releases are undoubtedly the Thieves’ World
books scheduled for next summer. We’ve got four books planned to
start and we couldn’t be happier to be bringing Sanctuary to the d20
System. We’ve also got a terrific d20 Modern setting coming up, by
Terror in Freeport author Robert J. Toth. You’ll be
hearing more about that soon but I will tease you with the title:
Damnation Decade.

Of course, what would 2005 be
without Mutants & Masterminds? The core rulebook is
once again sold out, so we’ll be sending it off for a third printing
this month. Freedom City is also sold out, but we won’t
be reprinting that for a bit. It’s not as pressing as the core book,
which really must take priority. The next new sourcebook for M&M
is Gimmick’s Guide to Gadgets, followed by Lockdown.
The latter product is a fully detailed prison for supervillains,
which is sure to add some fun to any campaign. The identity of the
next M&M book is still secret, but we’ll be tearing
the mask off that one in a few months.

The biggest news
for me is Warhammer Fantasy Roleplay, 2nd Edition.
We’ve been working with Black Industries for a year now to make this
a reality and the core rulebook is finally finished. I spent nearly
all of 2004 designing the rules and putting together a line of
support products. Black Industries will be releasing Warhammer
on March 18, and it’s an event you won’t want to miss. Watch the
Black Industries website (blackindustries.com) for more info and
previews. A grim world of perilous adventure awaits!

That’s a
broad overview of where we’re going over the next year. We also have
a couple of surprises lined up and now that WFRP is
done, we’ve gotten Dragon Fist rolling as well. Yes,
it’s true, there should be some high flyin’ wuxia action in all
of your futures! Thanks again for your support. Stick with us in
2005. You ain’t seen nothing yet. 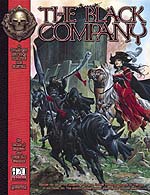 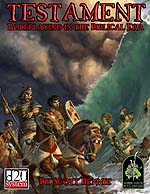 Courtesy of our friends at Goodman Games, we have a free adventure for you Testament fans. "The Tribulations of Kanah" originally appeared in the ENWorld Player’s Journal.
Free Adventure for Testament: Roleplaying in the Biblical Era 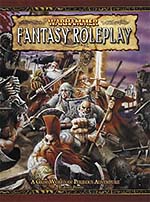