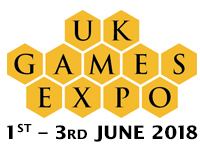 The largest Hobby Games Convention in the UK

Now in its 12th Year, UK Games Expo (UKGE) is the largest Hobby Games Convention in the UK. A fun event appealing to families and the general public as well as the enthusiast.

UK Games Expo is the premier event in the UK where all aspects of the gaming hobby are represented under one roof:

The goal is to create a fun event which will appeal to families and the general public as well as the enthusiast. You arrive, you wander around the trade stands, try out any games you wish, sit in on the seminars or join in with the tournaments These are the main elements:

Our Events Director, Veronica Templar was born and raised in the 1880s, before accidentally falling through a time hole. Her hobbies include repurposing aluminum foil, organizing ALL the things, and owning fabulous shoes.

She divides her time between the past, present, and future, and has twenty seven cats between the various time lines.

When Veronica is not out fighting crime, she goes out and fights even more crime, because that’s what heroes do.