Tag Archive for: Beyond the Ring

Some of you may have seen the recent actual play of Cthulhu Awakens that I ran in conjunction with the Kickstarter. I really enjoyed running the game, but after that brief foray into the realms of eldritch horror, I’m excited to say that it’s time for me to get back to The Expanse! 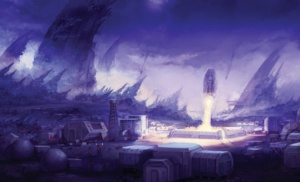 During my first official visit to ThursdAGE last week, we talked a little about the new Expanse sourcebook, Beyond the Ring. (Check it out if you want to see some of the amazing art in this book) We also did a bit of a deep dive into Chapter 5: System & World Creation in Beyond the Ring. If you check out the stream, you’ll get a behind the scenes look as I go through both the system and world creation systems step by step. One of the challenges I have as the developer for The Expanse RPG is where to draw the line between story and science. This chapter, in particular, proved to be quite a balancing act in that arena. After all, this is a game about telling stories, not a science textbook. But on the other hand, The Expanse novels are heavily grounded in real science. Creating your own systems and worlds is an excellent opportunity for bringing a little more science into your games.

In Chapter 5: System & World Creation, we do our best to give you all the pertinent information needed to create your own worlds and systems without getting too bogged down. All of the charts and tables might look a little daunting for someone who doesn’t know much about the science of spectral types, orbital zones, or atmospheric compositions, but I promise you don’t need to know any of the science. Just follow the steps, and you can design a system without any difficulty. Truthfully, the luminosity of the star or a planet’s orbital period probably won’t come into play in your story, but being able to provide all of the star system information to your players lends a sense of authenticity that this is a real system with real planets. Your scientifically minded players will love it, and your story-driven players will appreciate the attention to detail.

One question I’ve been asked is whether science 100% accurate all of the time? My simple answer is: I’m sure it’s not. But it’s pretty close and certainly more than enough for telling a good story. Ultimately even The Expanse is about the story and the characters. The science is there to give it a backdrop of realism and authenticity, but in the end, it’s a good story that matters.

So, do you want to know more about Beyond the Ring and how you can use it in your own campaign? Well, you’re in luck! My appearance on ThursdAGE was just a teaser for what’s to come. In the following weeks I’m going to be running an actual play of The Expanse RPG that showcases a lot of the key systems in Beyond the Ring, especially colony creation and advancement. In Session Zero we’re going to build the colony that the PCs are going to be connected to using the rules in the book. Sessions 1 and 2 will be a story that centers around the colony. Finally, Session 3 will be the finale, and we’ll go through colony advancement, including the repercussions of the PC’s action during the adventure. So, keep your eyes peeled for the exact dates.

There will also be opportunities for those of you watching live to ask questions, and maybe even some audience participation. So, if you’re considering purchasing Beyond the Ring and want to know more this will be an excellent opportunity to see what it’s all about.

You can Pre-Order the print version of Beyond the Ring right now and receive the PDF for just an additional $5! But we understand that shipping internationally is a little difficult at the moment, so our overseas fans can also get the $5 PDF add-on by just letting their Friendly Local Game Store know that they would like to Pre-Order the book there. Just ask your store clerk to contact us, or their games distributor, and mention the Pre-Order Plus program, we will take care of the rest!