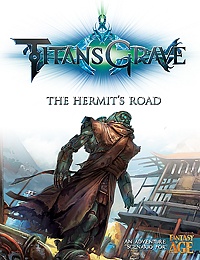 Just in time for International Tabletop Day, we have a brand-new Titansgrave adventure, The Hermit’s Road!

The Player Characters  are sent to investigate the existence of purported pre-Cataclysm ruins on the outskirts of the City-State of Karros. Here they discover more than they bargained for, as the ruins hide a secret more valuable than gold or jewels.

The Hermit’s Road is designed for characters of levels 2-4. You only need the Fantasy AGE Basic Rulebook to run it, though having Titansgrave: The Ashes of Valkana is certainly helpful. The Fantasy AGE Game Master’s Kit is a key accessory for your Adventure Game Engine campaign. It features a three-panel hardback screen with all the essential game info you need at the table. It also includes 4 quick reference cards that put the stunts and actions at your fingertips, and a combat tracker that you can write on with wet or dry erase markers. The Game Master’s Kit is the perfect complement to the Fantasy AGE RPG and will help you kick off your game with style.