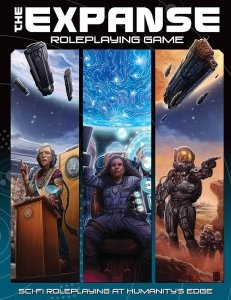 The Expanse Roleplaying Game brings James S.A. Corey’s award-winning series of science fiction novels to the tabletop. Using the Adventure Game Engine (AGE) rules that power Green Ronin’s Fantasy AGE, Blue Rose, and Modern AGE RPGs, The Expanse takes players to a far-future solar system where humanity is divided: Martians, Belters, and the people of old Earth struggle for political power and resources, but older, alien, forces are stirring in the universe, and human history is about to take an unexpected new turn.

The Expanse RPG applies the fast-playing, stunt-powered AGE system to spaceships, solar colonies, adventure, and intrigue in the far-future, where the actions of the characters may change the course of history! 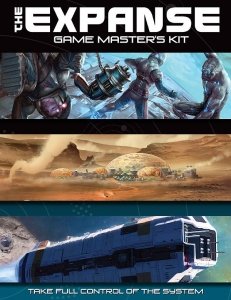 Being a Game Master for such a rich setting is a big job, so The Expanse Game Master’s Kit is here to help. It provides a sturdy, full-color GM screen with essential tables and references for game-play on one side and evocative artwork on the other. It also includes 4 quick reference cards that put the stunts and actions at your fingertips, a combat tracker that you can write on with wet or dry erase markers, a set of pre-generated Player Characters, and a complete adventure to launch your crew right into the exciting universe of The Expanse!

The Expanse is based on the exciting new Modern AGE rules-set, and includes many of its features, such as customized character building using Backgrounds and Professions, Drives for character engagement, and an abstract resources system. It also makes use of the Modern AGE approach to action, exploration, and social encounters, complete with stunts and systems for all of them.


The following are some of the unique features of The Expanse in comparison to other AGE System games: