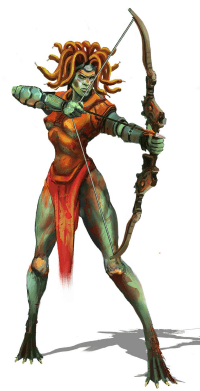 Heya folks, Jack here. I wanted to take a break from working on AGE and Dragon AGE content to talk to you a bit about making your own content for the Adventure Game Engine. Specifically, let’s talk about making monsters.

Since the recent launch of Fantasy AGE and Titansgrave: Ashes of Valkana, I get asked a lot of questions, from “When will they be in stores,” to “What the hell is Interlligence?!” People have a lot of questions about these books.

However, by far one of the most common questions I get asked is “so, any advice on making our own monsters?” Which makes sense. While both Titansgrave and Fantasy AGE contain some cool beasties, there’s plenty of room for more monsters, demons, and beasties. So for today’s Ronin Round Table, I’d like to talk a bit about some things to consider when building your own monsters.

Generally, it’s easy to make your own monsters in Fantasy AGE. Come up with a concept or borrow one from your favorite stories, myths, legends, books, etc… Assign statistics that match up to the rough idea of what your monster can do and then tailor it so that you’re not making it too tough or too easy on your PCs when they face such threats. Speaking of…

You might find that despite having a solid idea and being sure everything will work out, you accidentally made a monster that’s far too strong or weak for the PCs. There are several ways to do this, but some common mistakes to avoid are:

Making monsters who hit all the time or not at all. A really high Accuracy or Fighting is going to mean even very agile and defensive PCs will get nailed a lot. Remember the average dice roll with 3d6 is 11 and starting PCs usually have between 10 and 15 defense. Also, these numbers are slow to increase, so even more experienced PCs won’t become so much harder to hit without serious Ability increases, special items, and other advancements. So you don’t need to give most monsters Fighting or Accuracy of 5 or higher to hit often, and those with scores of 7 or above will hit very often, especially with appropriate focuses. Even a Fighting or Accuracy 1 monster with a focus for their main attack will hit a Defense 14 PC about half the time. Conversely, making monsters with very low Fighting and Accuracy can also be a problem, though it’s admittedly harder to do.

However, if you’re giving a monster -2 Accuracy or some similarly low Ability, consider if that will make them miss often enough they seem more like a joke than a threat.

Making monsters who do ridiculous damage or almost nothing. Sometimes you want a big scary creature who does tons of damage. A giant, dragon, and other big scary monsters should be scary and hit very hard. On the other hand, a swarm of rats might do only a bit of damage and serve to weaken PCs without seriously endangering their lives. Also, remember that damage is a combination of both the dice rolled and the Ability added in and how often you hit affects the damage monsters will do over time.

So a high Accuracy “minor” monster with a 1d6+3 damage attack and 4 Strength will being doing at least 8 damage every hit (1 on the die, plus 3 and then 4 more for Strength). That might be just want you want. Or you might find you accidentally made a minor creature than can kill a player’s unarmored low-defense mage far too quickly for what you had in mind. Likewise, a big scary beast with 3d6 damage and Strength 9 is likely really nasty (doing around 20 damage a hit). Just make sure that’s the effect you want for your monsters.

Ignoring or Overdoing Armor. Armor is both damage mitigating and a pacing mechanism. It often won’t stop a PC or monster from ever taking damage, but it increases the time it takes to damage and defeat a target in combat. So if you give a monster no or very low armor, you’re opening it up to every hit, no matter how small. This might be fine, but it means that anyone who can survive the creature’s attacks and damage can take it down reliably. This might not be what you want for certain monsters. On the other hand, very high armor can get frustrating. It might be tempting to give a heavily armored creature 10 armor rating (or even higher) but realize that without the right stunts or very high damage you’re setting up combats to be many rounds of “I hit and…nothing.”

Not Balancing Health with Other Factors. High defense or armor can make a monster a challenging foe. If combined with really high health, it can make them annoying. On the other hand, too little Health creates “paper tigers.” Again, if intended? That’s cool, but realize that many players expect to only encounter easily dispatched or incredibly tough monsters rarely and at specific times appropriate to the campaign. If your Lizardman lieutenant in a moderately difficult encounter has 150 health and Armor Rating 8 and Defense 17? Your PCs will get bored, frustrated, or discouraged long before they defeat this “mid boss” encounter.

Forgetting Powers and Special Abilities or Overdoing Them. A few cool special abilities, powers, and unique stunts goes a long way. Too many and you risk bogging down encounters. But having none of them makes monsters just collections of basic attacks and statistics. Also, don’t be shy about converting or borrowing powers from existing creatures. If you want a horde of dog-sized flesh-eating beetles to assault your PCs? Adapting Swarm Tactics from the Walking Dead entry in the Fantasy AGE Bestiary will work well and save you design time.

Ignoring the Utility of Reskinning. Sometimes a monster is just an existing one with minor changes and a new look. This isn’t “cheating”; it’s expediency. A terrifying battle-beast created by an evil sorcerer might just be a Demon Soldier with Wings, Blending, or other special abilities already detailed in the Bestiary chapter of Fantasy AGE. A flesh-eating giant “deep one” style humanoid might just be an Ogre with Aquatic and perhaps Bite and Claw attacks adapted from the Manticore entry. These extra abilities will make monsters tougher and you’ll want to consider than when balancing encounters, but it makes it fairly easy to come up with terrifying new threats for PCs to face in a relatively short time.

Also in general, it’s usually better to make weaker monsters than overpowering ones. If a monster is too weak in an encounter? Simply increase it the next time a similar creature is encountered and if anyone wonders, it was a young, inexperienced, or immature monster they faced before—this is the real deal. That’s not even a lie, as the first attempt was not as refined or evolved in many cases. It’s okay if the first demon bear-thing your PCs fight turns out to be a juvenile version of a much scarier threat. In fact, this can allow monsters to grow and evolve alongside your PCs as the campaign progresses.

So those are some of the basics. We’ll be presenting new monsters in the future, but we realize many GMs want to start hacking away at their basic Bestiary entries in the meantime. Hopefully this discussion will help them do exactly that.