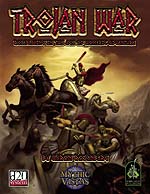 We recently realized that we never gave you a sneak peek at The Trojan War, our popular Mythic Vistas setting supplement that lets you adventure in the time of the Greek gods and take part in Homeric myths. To rectify that situation, today we present a PDF preview featuring the entire charioteer class, straight out of the book.
Trojan War PDF Preview: Charioteer