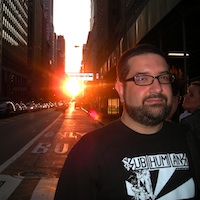 From time to time I get e-mail from people visiting the Seattle area, asking if they can swing by our headquarters. The requests sometimes come from game industry colleagues and other times from gamers interested in seeing where it all happens. Some seem to expect to see desks covered with miniatures and action figures, a dedicated gaming room for playtests, and an employee lounge for kibitzing and parties. While that does sound great, the truth is that we’ve never had an office and it’s unlikely we ever will.
When I started Green Ronin back in 2000, it was just Nicole and I working nights and weekends out of our apartment in the Madrona neighborhood of Seattle. I was still working at Wizards of the Coast and Nicole was at Cheapass Games. Hal started by doing freelance cover design and then layout for us, but soon came on as a partner. He was on the East Coast though, so even when I left WotC in 2002 it didn’t make sense to get an office.
As we’ve added more staff over the years, most also lived out of state. Some companies will demand new hires move, but we’ve never made that a condition of employment. Hobby game jobs do not come with a big paycheck, so we try to make up for that by offering our staff flexibility. Employees don’t have to move, can set their own hours, and can take time off when they need it as long as they hit their deadlines. That has helped us recruit the right people, regardless of where they happen to live.
We are up to 11 full and part time staff people now. Steve Kenson is in New Hampshire, Hal Mangold in the Washington DC area, Bill Bodden in Wisconsin, Joe Carriker in Georgia, and Will Hindmarch in Illinois. We’ve previously had employees in Tennessee, Colorado, Minnesota, and California, and I spent 10 months living in Texas (working on the Warhammer 40K MMO in Austin) over the past year. When I returned and we brought Rich Redman aboard recently, that actually tipped the scale in favor of Seattle locals for the first time in a long time. Now Nicole Lindroos, Marc Schmalz, Evan Sass, Jon Leitheusser, Rich, and I all call the Emerald City home. And still, it isn’t worth it for us to get an office. We’d rather take the money that’d cost each month and invest it in new products. In our business and in this economy, low overhead is a good thing.
By and large our system works well for us but there are downsides. I can’t grab Will and Steve at a moment’s notice to confab about Dragon Age design. We don’t get to have group lunches or holiday parties. We do get the team together at least twice a year though. GenCon is always all hands on deck, and nothing builds camaraderie like surviving four manic days of sales, seminars, meetings, and award ceremonies. We cap it off with a team dinner on Sunday night. Then in October we do our yearly summit here in Seattle. That’s when the whole staff gets together to plan for the coming year and enjoy many lively debates (these became slightly less raucous when we instituted the no wine before 3 pm rule).
Our company culture isn’t for everyone but it works for us. So no, you can’t visit our headquarters, but we hope you enjoy the games we work hard on in home offices across the country. Happy holidays!