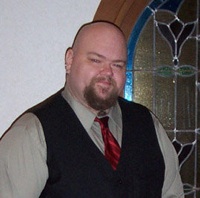 Hello, all. As the new kid hereabouts, Chris suggested that I take this opportunity to introduce myself to folks who may not know me.

I’ve been writing on a freelance basis in the role-playing game industry for about a decade, give or take a little here and there. I got my start with the birth of the d20 movement. My first published credit was fairly unorthodox, but definitely a sign of the times: Sword & Sorcery Studios’ Relics & Rituals book, an open call sourcebook that was the second in a line of books that would eventually become the Scarred Lands setting (which I eventually ended up taking over as developer).

In the time since, I’ve done tons of work for White Wolf, and dipped my toe in a couple of other places, notably Wizards of the Coast and of course Green Ronin. Four years ago or so, I pretty much dropped off the freelancer map, going to work first for White Wolf as an in-house developer, and then for CCP North America.

Times being what they are, I’m back out in the world now, and happy to have found a home with Green Ronin as the Song of Ice & Fire Roleplaying line developer. I have some pretty tremendous shoes to fill, let me tell you: the work that Rob Schwalb, Steve Kenson and Chris Pramas did on this system is fantastic, and I’m happy to be given a chance to help guide the vision of this line.

I admit to being a bit of a Song of Ice & Fire nerd, truth be told. I love George R.R. Martin’s setting: the intricacies of it, the nuanced characters, the rich history that doesn’t just sit there, but rears its head again and again. It is quite literally a dream come true to be able to help shepherd the line for Green Ronin.

My duties are the same as other developers: generating outlines for new books, hiring writers, editing their manuscripts, putting together art notes for the art department, and generally getting the manuscript ready to be handed over to production for layout. Once a pre-print PDF of the book is ready, I help go through it for mistakes, omissions, or just things that looked better as a word processor document, but definitely need tweaking when it’s been put together as a real book.

I’m also pretty active on the Green Ronin forums, answering questions, offering suggestions for game play, and thoroughly enjoying the write-ups our fantastic players provide of their home games. I admit that I’m the sort of developer who gives other industry professionals a bad name: I don’t mind hearing about other peoples’ games, particularly those that are in a setting I’m working on. Fair warning, though: what is good for the goose is good for the gander. I may just subject you to my own home game stories, too.

At the current time, I’m helping get some of the line’s previous products ready for production. Most of the hard work has already been done on these; I’m just helping spot mistakes that need fixing, and implementing errata here and there for new printings. I’ve done the final development work on the Night’s Watch (again, following in the footsteps of a masterful predecessor, in this case the irredoubtable Jim Kiley).

But with the upcoming Chronicle System PDFs, and further sourcebooks (and even a boxed set!), I’m looking forward to moving the vision of the line forward and more than anything else, continuing to create a fantastic system that our players and fans can get hours of fun out of.