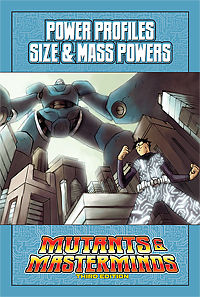 Contrary to what they say, size does matter, but not necessarily in the ways you might think! From titanic giants to mighty mites, Size & Mass Powers looks at the very big and the very small, and all the things you can do when you see the world from the perspective of a different size. For M&M Third Edition.