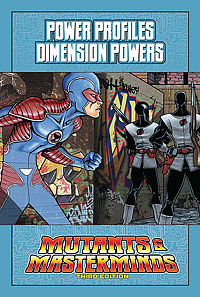 You can get some perspective by getting out… way out, into another dimension altogether! Dimensional Powers involve shifting between, and manipulating, different layers of reality to move between dimensions, summon things from them, or use them as traps or weapons. For M&M Third Edition.