A little over a year ago Wil Wheaton called to tell me about a show he was hosting for Felicia Day’s new YouTube channel, Geek & Sundry. He described it as Celebrity Poker meets Dinner for 5. He wanted to feature my Dragon Age RPG on the show and was I interested in coming to LA to run it? Oh, and the filming would be in less than two weeks. That was a lot to take in!

The show was, of course, Tabletop, which debuted at the end of March last year. It is hugely entertaining and is also a great thing for gaming and the game industry. It’s introducing a lot of people to modern gaming and showing how fun it can be. This is just the sort of thing hobby gaming, and especially roleplaying, have needed for a long time and Wil was the perfect guy to make it happen. He is not only beloved by geeks, but his passion for games is pure and true. He makes gaming look fun on Tabletop because he is having a blast. You can’t fake that.

Tabletop’s success was still in the future when I got that call though. Naturally I agreed to do it. Wil is a friend, the concept sounded great, and I hoped it would give Dragon Age exposure to a broader audience. So I booked a flight to LA for February 3. The filming would be on Sunday the 5th.

My next task was to figure out an adventure. I didn’t have anything suitable ready, so I had to start from scratch. I had about a week to write something and to make pre-generated characters. I had to print everything on a parchment colored paper, not for period feel but because white paper would glare under the cameras.

Despite the short deadline, I wanted to playtest it at least once before the filming. I contacted my old friend Cecil Castellucci (who wrote the Plain Janes for DC, as well as YA novels like Beige and First Day on Earth). We’ve been trying to game together for years now, so I asked if she could get a group together for Saturday the 4th so I could run the adventure. This she did but then her recruits flaked out at the last minute. D’oh! She and I went to a great bar in Burbank called Tony’s Darts Away instead and we talked through the story. That was helpful, but we still need to game together one of these days (make a note, Castellucci!).

Cecil dropped me off at Wil’s place late that night. We stayed up too late talking about the show and such and then I crashed on the pull out couch in Wil’s office, right under a giant velvet painting of Wesley Crusher that John Scalzi had given him a few years earlier. That was a bit creepy but that’s not what kept me awake. Running a game and trying to make RPGs look fun with cameras rolling? Letting down my friend? Imagining thousands of people judging my game and my GMing? Yeah, that was the stuff that kept me up until late in the night. And, of course, we had to get up at stupid o’clock for the shoot. I don’t think I got more than two hours of sleep that night. 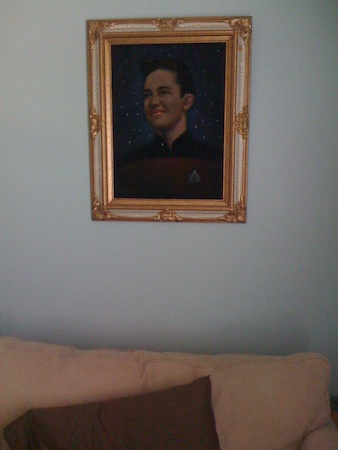 Wil, Boyan Radakovich (a game industry friend who ended up working on Tabletop), and I drove to downtown LA to a building that had been rented for the filming. I was immediately impressed with the scope of the production. I figured a web series wasn’t likely to have a big crew, but I was so wrong. This was a professional shoot all around. There were easily 25 people there for cameras, sound, makeup, catering—the whole shebang. They had an awesome table from Geek Chic for us to play on. There were three cameras, including one for overhead shots of the table. 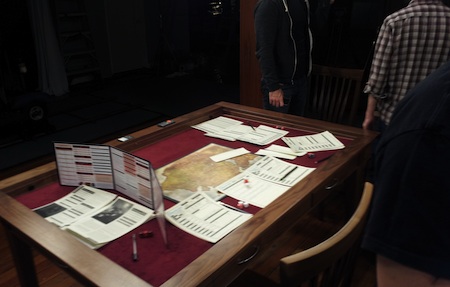 The Geek Chic table during a break in filming.

Felicia Day was also there, as she is a producer and Tabletop is part of her Geek & Sundry channel on YouTube. We had been on a Dragon Age panel together at the Penny Arcade Expo the year before, so I went over to say hi and ask a burning question. "Why aren’t you playing?" I asked. "You did the Dragon Age: Redemption web series with BioWare, so you’d be perfect." She told me she had filled in for a guest star who had to cancel on a previous episode, and she didn’t want to appear too much on Tabletop lest people get sick of her. This boggled me, I must say. I just can’t see people complaining about too much Felicia on her own channel! More importantly, I wish she would have played so we could have had a woman in the group. There are still people who believe that roleplaying games are something that only guys do and that is dead wrong.

Not that I’m complaining about the group I did get, mind you. My four players were Wil, Chris Hardwick (The Nerdist), Kevin Sussman (Stuart the comic shop owner on Big Bang Theory), and Sam Witwer (Aidan on Being Human and Crashdown on Battlestar Galactica). I met Chris, Kevin, and Sam that morning over breakfast and we chatted a bit about gaming and the shoot. They all seemed nice so I felt pretty good going into the session. 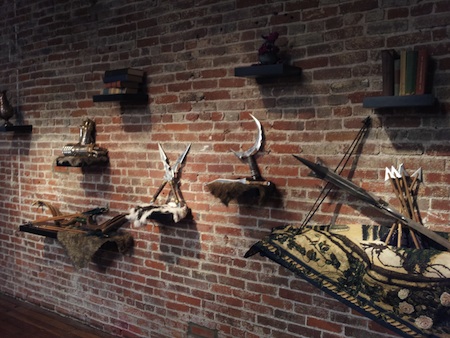 The set was decorated with props from Felicia’s Dragon Age: Redemption web series.

Soon the cameras would roll. More on that in Part 2!