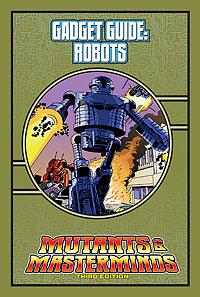 We’re pleased to introduce the latest series of low-cost PDFs for Mutants & Masterminds Third Edition, the Gadget Guides! Each Gadget Guide takes a look at a particular type of devices in Mutants & Masterminds game terms, putting together the effects and modifiers from the Hero’s Handbook to present different a wide variety of gadgets of that type. It also looks at specific concepts related to creating and using those devices in play. The Guide is a catalog of ready to use toys for your M&M game!

As heroes, villains, and legions of minions, robots have been a staple of superheroes since the days of the first comic strips. Although they have become more sophisticated as real-world technology has moved ever closer to the mechanical marvels of comic books, robots remain common technology for both heroes and villains. This Gadget Guide looks at creating robots of all types in M&M game terms, and includes five sample robot archetypes!