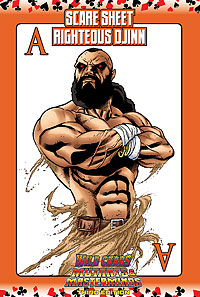 Sword of the Caliphate, and the terror of all who oppose it, the Righteous Djinn is a mysterious ace whose power seems to grow with each death that follows in his wake. This SCARE Sheet also profiles the fundamentalist militia of Egypt, the Egyptian army, the Army of the Caliphate, and the Committee’s first venture at the Battle of Aswan. (For Mutants & Masterminds Third Edition.)