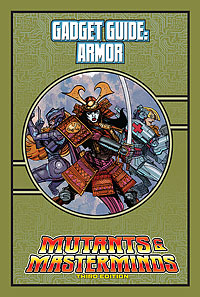 Along with weapons, armor and protective gear are some of the first tools and technologies. Heroes lacking invulnerability, intangibility, or superhuman speed may rely on armor and other protective gadgets to survive the dangers of their heroics, and some make armor their primary theme. This Guide looks at all types of protective gadgets, from armor and shields to goggles and gas masks. For M&M Third Edition.