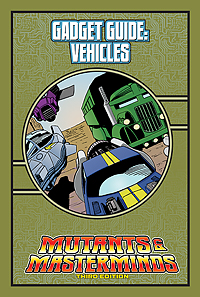 From hotrods to starships, many heroes and villains use different vehicles to get from place to place, and some even rely heavily on a vehicle as the source of many of their abilities. This Guide expands the game systems and information on vehicles found in the Mutants & Masterminds Hero’s Handbook.