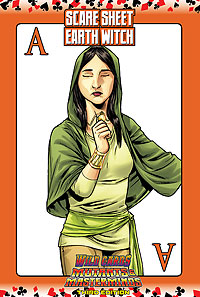 In her native Aztec, New Mexico, they called Ana Cortez La Brujita de la Tierra, the "Earth Witch." She initially thought her earth-moving power was only good for digging ditches, but soon learned from the Committee that she could do so much more with it. (For Mutants & Masterminds Third Edition.)