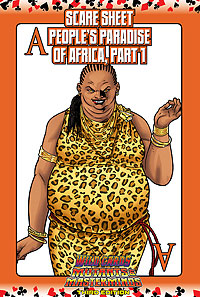 The Wild Card has rewritten the map in many ways, nowhere more so than Africa, where the Caliphate rules the Middle East and the new "People’s Paradise" dominates central Africa through the ruthless cunning of its rulers and the aid of the rebel ace Tom Weathers and the mysterious Leopard Men. (For Mutants & Masterminds Third Edition.)