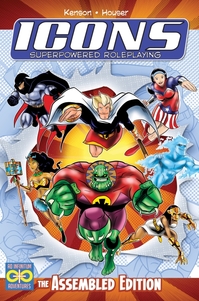 The "cottage" nature of the tabletop gaming industry leads to a lot of funny things: supposedly fierce "competitors" often know and see each other socially, companies trade employees and creative staff, and creators…well, sometimes we get a particular idea that takes on a life of its own.

One such idea was Icons Superpowered Roleplaying, a concept that began when I was mucking about with the attribute ladder of the Fudge RPG and mixing-and-matching its concepts with the old Marvel Super-Heroes game (a long-time favorite of mine, as anyone who has read my essay in Hobby Games: The 100 Best knows). I referred to the initial set of notes as "The Superlative System" and it gathered electronic dust on my website for some time.

Then I became fascinated with the idea of randomly-generated superhero characters, a concept I had once scorned (we all have our phases). So I dug up the Superlative notes and began tinkering some more. By that time, the Fate iteration of Fudge had come into prominence (via Spirit of the Century) and I looked at some of its innovations, particularly aspects. I was a good way through a first draft, just playing around with the concepts, when Gareth Skarka from Adamant Entertainment mentioned on an industry mailing list that he was looking to publish an "old school" superhero RPG that combined a lot of the qualities of my design. I got in touch with him, showed him some of my initial work, and a deal to publish what became Icons was struck.

Before that deal was made, however, there was the odd business of getting in touch with Chris Pramas (President of Green Ronin Publishing) about my putting my name on another superhero game, seeing as it was already associated with Green Ronin’s best-selling Mutants & Masterminds. Fortunately, Chris is a reasonable guy, and understands both the cottage nature of the industry and the designer’s impulse to create (not to mention my tendency to want to work on or for every superhero RPG under the sun).

To be honest, I’d envisioned Icons as a one-off: it was more of a "pick-up" game than M&M, where you rolled up some heroes, got into a slugfest with some bad guys, and that was that. It has less prep-time to play and was a fun springboard to coming up with off-the-wall character ideas. Then Adamant recruited other writers to produce adventures for Icons. Then came Villainomicon, its first sourcebook, and third-parties began publishing under the Icons Compatibility License. Icons was even nominated for awards! Before I knew it, Icons was "a thing"!

I eventually parted ways with Adamant Entertainment, starting my own imprint, called Ad Infinitum Adventures to publish Icons material. Still, I’m a one-man operation, designing for Green Ronin, running another (metaphysical) publishing imprint, and occasionally freelancing, so Ad Infinitum doesn’t have a lot of resources. Still, I was able to run a successful Kickstarter to publish Great Power, the expanded powers sourcebook I’d been working on, and to bring out several new adventures for the game. Still, to take Icons to the next level, I’d need some help.

That’s where we come full circle. Chris Pramas offered me a best-of-both-worlds option: Green Ronin would partner with Ad Infinitum to distribute an updated print edition of the Icons rules. We made plans at our annual company meeting last Fall, and finalized them while work progressed on what we call "The Assembled Edition" of Icons!

In production now with great graphic designer Daniel Solis and the ever-steady artist Dan Houser (who has defined the look of Icons since the beginning), the Assembled Edition brings Icons up-to-date with all that has happened since its initial publication and gives Ad Infinitum a solid foundation to build upon. It includes updates from Great Power (while preserving that book’s value as an expanded powers book) along with a lot of "core" material like pyramid tests (in all their glorious variations), supplemental rules from Villainomicon and Team-Up, and updated art and graphic design in the style of Great Power, all in a beautiful new hardcover book!

Icons, the Assembled Edition, is planned to release this Summer, and I couldn’t be happier than to partner with my friends at Green Ronin Publishing to make it happen. Stay tuned to greenronin.com and stevekenson.com for news and updates as things progress!