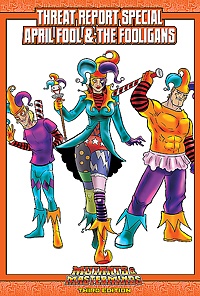 No foolin’! Steve Kenson created a fun Mutants & Masterminds villain and her gang, April Fool and the Fooligans, and Icons artist Dan Houser illustrated it beautifully. Now it can be yours, for just $1.29. Don’t believe anything else you read online on April Fool’s Day, but this post is actually true.