Hey folks, Jack here. So there’s been a lot of news lately in the realm of DC Comics and television. The finale for Arrow this season is already out with Flash coming soon. Constantine on NBC has ended but rumors of it coming back elsewhere or even crossing over with existing shows abound. Gotham is still running on Fox, CBS has announced it has picked up Supergirl, and the CW has announced Legends of Tomorrow, a show that brings together an eclectic group of heroes and villains for a time-traveling romp to stop Vandal Savage.

So…wow. If you’d told kid-me this would be the face of TV now? I would have been both thrilled and really skeptical. I would have assumed these had to be cartoons, because…the Flash on TV? Okay, maybe. After all, they did it before. But Green Arrow, Black Canary, Deathstroke, Ra’s al Ghul, the Suicide Squad, and many more making appearances? Yeah, sure….pull the other one. I mean, Katana even shows up.

With all that television superhero goodness I thought I’d take a step back from all the AGE and other cool stuff to discuss one of our self-contained products from a few years back, DC Adventures. Using the Mutants and Masterminds 3rd Edition system, DC Adventures is a 4 volume game that gives rules, setting material, and hundreds of heroes and villains from the DC Universe for use in campaigns. When the books were produced, Green Ronin decided to aim for iconic versions of the heroes and villains. So instead of only focusing on a character during a single run of comics, we aimed to produce more general and well-known versions in the hopes they could be more easily used for a variety of games, plots, and stories in multiple versions of the DCU.

Now that we’ve got a quickly developing television version of the DC Comics universe (DCTVU? Huh, kinda sounds like a Law & Order spinoff), I’ve been thinking how cool it would be to use DCA to run a version of that universe. At first glance this seems challenging. After all, the characters are from the comics and they aren’t exactly the same in many cases.

Note that in some cases, especially with the heroes, some minor alteration is necessary. But those alterations are usually quite easy, simple acts of slight omission or downgrading a PL or two. For ex, young newly minted Flash Barry Allen might not be on the same level as Flash in his prime, but he’s got all the same abilities at a slightly lower (and constantly growing) level. Arrow is a bit more martial arts heavy than the iconic comic version but…he maps quite well to the Connor Hawke version of the character. Black Canary’s sonic cry is a device and she favors fighting batons, but she’s very much the same hero. Firestorm might not have busted out his matter manipulation abilities or phasing abilities yet, but his flight and fire generation are well-established—and who knows? We might see those powers next season and GMs and players could certainly have Firestorm and other characters develop these abilities over time. Most of the characters who have shown up on Arrow, Flash, and who are slated to appear on Supergirl and Legends of Tomorrow are simplified, less powerful, or at times direct analogs for the versions provided in DC Adventures.

This was the sort of thing DC Adventures was made for. Adapting different versions of DC to your gaming table, and that includes the television shows. Admittedly, sometimes the adaptation is more extreme. The Atom uses a powered suit of armor with flight and energy blasts in addition to his other skills and abilities. And some supporting characters like John Diggle and Felicity Smoak would need to be created. However, even existing iconic characters already provided can be a real boon. Diggle’s combat abilities make him a lot like various trained commando heroes in the DC, such as Rick Flagg. And Felicity’s computer hacking and technical abilities are on par with Oracle’s, though she lacks her combat training and is not paralyzed. Supporting cast “dads” Captain Lance and Detective West are Jim Gordon like cops. And so on.

So if you’re itching to play in the ever-growing DCUTV world? Consider grabbing DC Adventures and giving it a shot. Sure, a lot of heroes have already shown up, but there are still plenty left. Imagine a TV Opal City with Starman and the Shade. Or maybe you want to take a shot at the Wonder Woman TV show that never got picked up a few years ago. A Suicide Squad spinoff on Arrow looks temporarily unlikely due to the upcoming feature film but that doesn’t mean it wouldn’t make a great campaign. 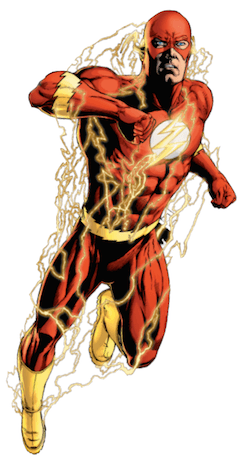 The possibilities are varied and all the tools to do it are already there, minus a bit of time and imagination to “TV” up the characters. One fun way to help with this is to “cast” your favorite actors as heroes and villains in your own tabletop series. Want Damian Lewis to play the Question? Or believe they’s no better Warlord than Anson Mount? It’s all good. Also, much like modern casting directors, you’re not bound by gender and race limitations for many characters. Think it would be great to see Rosario Dawson as Big Barda and Joe Taslim as Orion in your very own New Gods series? Go for it. You’re not even limited by time and space: cast actors from previous series or generations in your “tabletop series” if you’d like, especially if they bring an iconic quality to the role. And casting your PCs and NPCs it’s just a fun mental exercise, but it can help players visualize the action better and help give the game a “TV” feel.

To give you an idea how this works, check out our free preview of the Flash (Barry Allen) and Reverse Flash.  Though this represents Barry at the height of his career, most of his special “speed tricks” under his powers are things he’s been learning in the first season of his self-titled TV show.  He’s also been getting faster. So taking Flash represented here, dropping some powers and PL and then adding to them during his adventures is a simple and effective way to turn DC Adventures into DC Adventures…in Television!

So with the TV season almost done and summer fast approaching, consider getting your friends together for your own “show” featuring your favorite DC characters with an unlimited casting and special effects budget—your imagination!