Much has happened in the past several months with women speaking out on issues of sexual harassment and finally being heard. Prominent men in politics, business, media, even in children’s literature, have been called to account for behaviors ranging from inappropriate “jokes” to violent sexual assault. Here in Washington state, one of our women senators has proposed limits on the use of non-disclosure agreements to prevent victims of sexual harassment from speaking about their experiences. Seattle’s newly elected woman mayor wasted no time in ordering an extensive review of the city’s harassment and discrimination policies. Structures are being reviewed and put in place to more properly and fairly address issues in the workplace in particular, and I am glad to see it.

For some time now, especially since the rise of the internet and its ubiquitous place in our lives, women have worked at protecting themselves and each other through back channels and whisper networks, the now infamous “Shitty Media Men” list being one example. Unfortunately, whisper networks are of no use to women who don’t have the right connections to access them, nor are they immune from hearsay that can be difficult, if not impossible, to confirm. They are good for focusing attention on potentially dangerous or unpleasant people, good for self-preservation for those fortunate enough to have heard the right whispers at the right time, but they are far less effective at achieving justice. In a world where we literally have to worry that someone might call down a SWAT team on a person they dislike or begrudge, the threat of vigilantism sadly must be anticipated, addressed, and resisted in order to see systemic changes enacted and upheld. 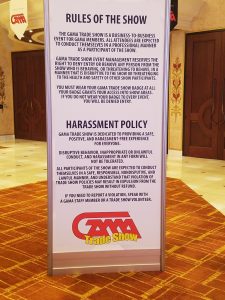 Merely having a “harassment policy” does not guarantee that such a policy is fair, just, effective, or evenly applied. Policies stating some variation of “at our sole discretion” actions that may or may not be taken are barely more than legal language to shield a company, convention, or organization from liability. Even policies attempting to address the issue of harassment in a sensitive manner for victims can fail in providing even the most basic due diligence, leaving themselves open to unethical manipulation and becoming party to (and legally liable for) defamation and other legal jeopardies any business wishes to avoid. “Justice” can be swift and summary, focused more on making the matter go away than understanding the truth and then acting accordingly.

When the dam broke on harassment in social media, I detailed in a semi-public post, viewable by over 1700 people, my own experiences with sexual abuse, stalking, harassment, and assault, the reverberating impact those events had on my life, and how my involvement in both providing support for other women in the game industry and standing up to try to make real change for women through my own company and my volunteer work had been particularly difficult and sometimes re-traumatizing, especially in the last year or two. To say I was at a particularly vulnerable point is an understatement and as “discussion” of public accusations of harassment in my own industry became more heated, I responded little differently than an animal in pain. It clarified for me that people in pain and trauma cannot always do right by others in pain and trauma, even with the best of intentions and the most sincere concern. It is an experience I do not want to repeat and as such, I will not be engaging in any further public debate on the subject. Instead, I intend to follow up with actions, to continue to provide opportunities for women through my company and my volunteer efforts, and to work for structural changes to the tabletop industry.

As of this writing, I am attending the GAMA Trade Show in Reno, where I will be bringing a proposal to the board for the adoption of guidelines and procedures called S.T.O.P. Harassment (Standards, Terms, and Other Practices). The intent is to create common and agreed upon set of policies for reporting issues of discrimination and harassment, setting up mechanisms for prompt, thorough, and impartial investigation into any such reports, and establishing protocols for taking corrective action. Green Ronin has paid for this document to undergo a legal review and we hope that GAMA can provide the impartial vehicle through which issues of inappropriate behavior can be properly addressed. The initial language we’re proposing can be found here: S.T.O.P. Harassment (Standards, Terms and Other Practices)

Tales of Blue Rose: Quartet of Thieves
Scroll to top Skip to content