Reposting from yesterday’s Kickstarter update, here’s an interview Chris did with Book of the Righteous developer Rob Schwalb:

Today I’ve got something fun for you: an interview I conducted with Robert J. Schwalb. Thanks to Rob for taking time out of his weekend to answer my questions.

Q: You’ll be developing the new edition of The Book of the Righteous and working on the rules design with Rodney Thompson. What’s the most exciting part of the project for you?

A: A billion years ago, when I was getting my start in the business, The Book of the Righteous was one of those books that left me astonished. It really was one of the high-water marks for d20 publishing and few supplements have ever come close to the imagination, the comprehensiveness, and the utility found in its pages. Further, it screamed to be used. You could pick up the book and build a world around it or just pull out the pieces you needed to flesh out your existing campaign. The chance to help bring this mighty tome to 5th Edition is both intimidating and exciting. The whole project is awesome and I’m thrilled to have the chance to bring this book to a whole new crop of D&D fans.

Q: What do you think your greatest challenge will be?

A: What made BotR such a powerful tool was that it took full advantage of 3rd Edition’s mechanics. Not only did the book produce a new class (the holy warrior), it also introduced a swathe of prestige classes, spells, feats, monsters, and more. Two editions later, we find D&D in a very different place from how it was almost fifteen years ago. We don’t have the same mechanical buckets into which we can chuck the various options. A domain, for example, is now a far weightier game object than it was in 3rd edition. Rather than go back to the prestige class well or try to emulate 3E design, Rodney and I are taking the story and finding the best way to express it through the current mechanics. In some ways, it’s like starting from scratch. Some might be simple, needing only to point toward an existing option in the game, but most will require entirely new design. Rodney and I will create new domains, oaths, and options for other classes as well. Each needs to stand on its own and be portable to other cosmologies/pantheons to ensure maximum usage.

Q: You wrote The Unholy Warrior’s Handbook, which was a sort of sequel to The Book of the Righteous. Are you going to fold any of that material into the new book?

A: Whew! That takes me back. Whether or not we get to incorporate any material from that book depends on how many pages we get to play with. I would love to include paladin oaths for Thellos, Naran, and the other evil gods. We are getting some room back since we won’t need as much space to express the mechanics as the original book needed, but stuff from the Unholy Warrior’s Handbook will only come forward if we have the space.

Q: Are there aspects of the Fifth Edition rules you think work particularly well with The Book of the Righteous?

A: Fifth Edition took many great steps forward, but one of the most interesting, and the one to our great advantage, was in class design. Classes represent big story ideas. They are broadly conceived to encompass several different archetypes. At some point in the character’s development, sometimes at level 1 and others at higher levels, the player faces a significant decision point, which involves choosing a subclass. Now the Player’s Handbook calls these points by many different names—ways, paths, archetypes, origin, patron, and so on, but they all have a similar function, which is to provide players with a way to customize their character along a particular development route. A rogue character with the thief archetype is pretty distinct from a rogue with the assassin archetype.

The subclass system lets us capture the holy warrior domains without needing a new class. We can get to the same place as the holy warrior took us by creating new oaths to model paladins of different religions or point readers to existing oaths when it makes sense to do so. Similarly, we can create new domains to make clerics of one god very distinct from those in service to another god or, again, just point the reader to an existing domain. In the end, subclass mechanics let us shape classes in a variety of ways without having to replace a class or add one to the game.

Q: When we first talked about the project, you felt strongly that we didn’t need to revisit prestige classes in the update. Do you think that’s a concept whose time has passed?

A: I really wrestled with this one. While not everyone in the universe loved the proliferation of prestige classes in Third Edition, I still feel they were a valuable addition to D&D and one that fit in well with how the game handled multiclassing. Most prestige classes were hyper-specialized around a set of mechanics or particular story, so going back to this design could be interesting in Fifth Edition. However, I resisted because I don’t think 5E needs them.

Classes now take up a lot more conceptual and mechanical real estate than they did in previous editions. For example, paladins in 3E were presented as champions of order and virtue. Variations on the paladin either came into the game as variant class features or through the domain system utilized by the holy warrior class. You could also customize your paladin through skill and feat selection.

In 5E, the paladin class is more broadly conceived, large enough to accommodate a wide range of expressions as shown in the Sacred Oath class feature. This decision point, more or less, grabs all the customization options and compresses them into this decision point. So if you want to play a classic paladin, choose Oath of Devotion. If you want to be more like the 4E warden class, choose the Oath of the Ancients. If you want to be like the 4E avenger class, then the Oath of Vengeance is for you. This decision, along with others like them, let the root class shoulder a lot of the work in delivering classic D&D classes. Rather than populating the game with dozens and dozens of classes, we can just make the core classes bigger by introducing new options for the big choice point.

When I looked at the prestige classes in 3E, I realized many were really just specializations of a particular class. While they could be accessed by a variety of classes, certain classes stand out. Assassins, for example, typically had levels in rogue. Likewise, archmages usually had levels in wizard. In a way, prestige classes function as 5E subclasses but lurking outside core classes. Since almost all customization options beyond level 1 live inside of classes, it makes sense to nest prestige classes inside the associated class. Doing so makes it clear what kinds of characters are likely to move into that area of specialization and removes the prerequisite hoops for doing so and without forcing groups to use the multiclass rules, which are optional. For groups who are using multiclassing, characters interested in moving into specialization from can simply do so by using the normal multiclassing rules described in the Player’s Handbook.

For example, let’s take the god Urian. The Book of the Righteous says this deity has three major orders: Skylarks (clerics), Eagles (paladins), and Hawks (a prestige class). The prestige class’s description says that hawks often come from the ranks of barbarians and through their training become “just as the bird for which they are named … trained to hunt and maul.” Rather than create a micro-class, we can instead build a new “path” choice for the barbarian class, perhaps called the Path of the Harrier. We can then build mechanics that reflect the sort of training members of the Hawks might receive. Barbarian characters worshiping Urian could choose this path when they reach 3rd level, while characters belonging to other classes who have Strength scores of 13 or higher can access them using the normal multiclassing rules. Best of all, even if your group isn’t using the full pantheon described in the book, the new path option offers barbarians a new choice even in games that don’t make use of this book.

Q: To date Wizards of the Coast has been focused on The Forgotten Realms setting, so many new campaigns are using it as a setting default. What do you think Realms players can get out of The Book of the Righteous?

A: One of the great things about the Realms is the size. There’s no shortage of gods in the realms and introducing the pantheon or parts of the pantheon from our book would only enrich the setting. Even if you don’t want to adopt the cosmology presented in BotR, you can easily plug the orders in to the religions of other gods. Finally, many of the new paths, domains, oaths, and other subclasses are setting agnostic, so you can plug those into whatever world you’re using.

A: It’s been an exciting year since the campaign ended. Since last April, I’ve released something like 75 products and we still have many more in the pipeline. Last month, I released Terrible Beauty, a juicy supplement filled with dark, twisted faeries and the hidden kingdoms in which they live. This month, I’m releasing Exquisite Agony. My take on Hell, it’s an alarming book, dripping with evil, and lavishly illustrated. I think the kids are really going to like it.

Thank you, Rob. We look forward to seeing what you do with The Book of the Righteous! And those of you who haven’t seen Shadow of the Demon Lord should check it out. It’s like, how much more Schwalb could it be? And the answer is none. None more Schwalb.

Please check out the Kickstarter, and we’d appreciate any support you can give us. 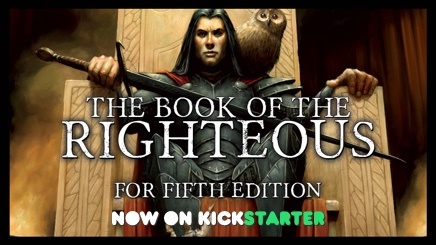