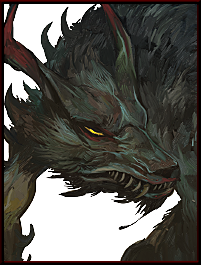 The Monstrous Lycanthrope template is modeled very closely after the lycanthrope template, but it allows more creatures to gain the template and does not limit the alternate forms to those of animals. Today’s sample creature is a tiefling afflicted with were-hell hound lycanthropy: "Even in humanoid form, Mahe’darg bears the sinister marks of an otherworldly heritage. Small horns and cloven hooves mark her as something other than human. In hellhound form, she looks like the shaggy, evil beast that often accompanies her, but the fiendish intelligence that characterizes both glimmers even more brightly in the tiefling were-hell hound’s eyes. Mahe’darg’s hybrid form is a true horror to look upon, with a demonic dog face and a muscular body bristling with fur that stinks of ash and brimstone."

Download the Monstrous Lycanthrope template and monster for free! 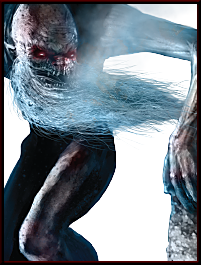 What fuels the nightmares of the mountain folk? Today’s Dread Ghoul template also brings us the Ghoul Lord Frost Giant sample creature: "A blight on the frozen lands, a ghoul lord frost giant fills the same role with the dead as a frost giant jarl with living giants. Ever hungry, the giant and its undead minions raid local villages and towns, leaving nothing but blood on the snow."

Download the Dread Ghoul template and monster for free! 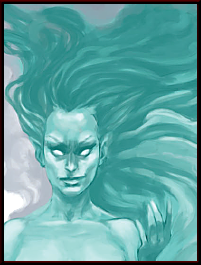 The White Lady is a classic of horror fiction, and today’s Dread Spectre template brings her the tabletop: "In life a woman of noble birth who spent her time in academic pursuits, the White Lady was murdered in the night by an assassin hired by a relative for the family fortune. The family member in question soon met with more horrible fate, as the noble woman’s spirit returned and drained all life from him. Now known as the White Lady, she wanders her city’s graveyards at night. Only a few have tried to interact with her to gain snippets of knowledge, for she knows much about the city, its people, and its secrets. Even fewer have returned alive."

Download the Dread Spectre template and monster for free! 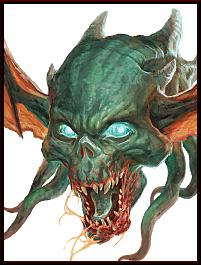 Today it’s the Plague Bearer template with the Plague Bearer Vargouille sample creature: "Plague bearer vargouilles are often used by those evil creatures that wish to quickly spread disease. They gleefully bite other creatures and flap away, leaving the diseases to do their worst."

Download the Plague Bearer template and monster for free!

As the last quarter of 2014 is upon us, I thought this would be a good time to update you all on the status of some of our announced books. Our release schedule has been something of a moving target this year for a variety of reasons, but many long simmering projects are either finished or close to being finished. Here is the most up to date info that I have right now.

Dragon Age, Set 3: This is printed and in our warehouse. Hooray! We had a few sent here to Seattle, so I had the pleasure of holding it in my hand after a long development cycle. Normally, we’d be releasing it to distributors next week, but this is an usual situation. We’ve printed only 2000 copies of Set 3 and will never be reprinting it (because of the forthcoming Dragon Age Core Rulebook). Naturally, after that initial announcement, direct orders for Set 3 were quite robust. That being the case, we are pausing to make sure that the pre-orders go out properly before releasing books to distributors and game stores. We will likely have no extras to fix screw ups so we want to ensure it’s done right. Distributors then get their chance to order. If there are any left over at that point, we’ll make it available on our webstore again.

The contents of Sets 1 to 3 of Dragon Age will, as previously announced, be compiled into a big, hardback Core Rulebook. We had hoped to release this concurrently with Dragon Age: Inquisition, but the printing delays of Set 3 made that untenable. We are now shooting for a January release.

Advanced Bestiary for the Pathfinder RPG: The Advanced Bestiary was originally a critically-acclaimed d20 book we published 10 years ago. We did a Kickstarter to update the book to the Pathfinder RPG and that was quite successful. The new edition is a big, beautiful full color hardback with all new art. It has been at print for a month or so and ought to be hitting our warehouse by the end of the month. Again, we will pause, this time to ship the book to the Kickstarter backers. Then we’ll handle pre-orders from our website, and release it to distributors in mid-November. It’s a hugely useful book for Pathfinder GMs, so if you missed the Kickstarter, do check it out.

Freeport, The City of Adventure for the Pathfinder RPG: Speaking of Kickstarters, we’ve also been hard at work on the new Freeport book. This is a new core book for our classic city setting, and it too has been customized for the Pathfinder RPG. At 512 pages, it will also be the biggest book we’ve ever published! This is in the final stages of production. Very shortly now, we should be releasing the PDF to Kickstarter backers. Then we’ll release that to the public and put the book up for pre-order. After a final errata check, it will go to print. We’ll announce a final release date when we have something from the printer.

Mutants & Masterminds: For M&M fans there is good and bad news. The good news is that the Atlas of Earth-Prime PDF series is resuming after some delays caused by convention season. They will pick up with the Mediterranean Atlas shortly. The bad news is that we’ve decided to delay the Cosmic Handbook to next year. We would have had to rush the production to get it out before Xmas and we didn’t want to do that. As we like to say, a late book is only late until it comes out, but a bad book is bad forever.

That’s all the news for now. We just had our yearly summit last weekend and we made a lot of important decisions there. We’ll be making some additional announcements about our schedule in November, and then in January I’ll do my traditional message about our plans for the coming year.

We hope you have an awesome Halloween. To help with that, we’ve put the Supernatural Handbook for Mutants & Masterminds on sale for 25% off (both the PDF and the printed book). Enjoy! 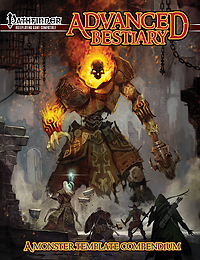 The Advanced Bestiary for the Pathfinder RPG is on its way to print, and that means it’s now available for pre-order! When you pre-order the Advanced Bestiary, you can get the PDF version of the book for just $5! In our online store you’ll be offered the PDF at checkout when you have the pre-order in your basket; participating retailers will be able to get you a coupon code for our online store that will provide the same deal on the PDF when you pre-order the hardback through them.

Pre-Order the Advanced Bestiary for the Pathfinder RPG today!

Green Ronin’s Pathfinder line developer, Owen Stephens, has accepted a job with Paizo Publishing, who have graciously agreed to keep sharing him with us in his freelance developer capacity. Here’s more about his sweet new day job:

A lifelong gamer, Owen K.C. Stephens began writing articles for Dragon Magazine in 1990, in the hopes of making enough money to pay for his RPG habit. In the decades since, his career has included work for Adventure-A-Week, Green Ronin, Steve Jackson Games, Super Genius Games, White Wolf, Wizards of the Coast, and Paizo. Stephens will join Paizo to helm the development of the quarterly, 64-page Pathfinder Module line, working with both established Pathfinder authors and RPG Superstar winners.

Says Paizo Editor-in-Chief F. Wesley Schneider, “Owen’s been helping us build adventures, settings, and rules for the Pathfinder RPG since its earliest days–you’d be hard pressed to find a single author who’s worked on more Pathfinder-related projects. Now that the stars have aligned for all of us, we couldn’t be more excited to have him lending his expertise to the everyday work of making Pathfinder even more awesome!”

The Pathfinder Roleplaying Game is the world’s best-selling tabletop RPG, in which players take on the role of brave adventurers fighting to survive in a world beset by magic and evil. The Pathfinder RPG is currently translated into multiple languages, and the vibrant Pathfinder universe has been licensed for comic book series, graphic novels, miniatures, plush toys, apparel, and is being developed into a massively multiplayer online roleplaying game.

Hey folks! I’m Owen K.C. Stephens, the newest member of the Green Ronin Staff, and the Pathfinder Developer. I was brought on to (among other things) help see the Pathfinder books for Freeport: City of Adventure and the new Advanced Bestiary through the writing, editing, and development process. I wanted to talk for a bit about where things are and some of the decisions made along the way.