Defining The Better Than Light Drive and The Bendall Field 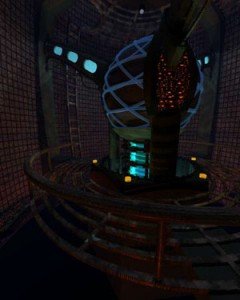 Created out of the need for a practical, efficient, interstellar propulsion system the Better-Than-Light (BTL) Drive has met and exceeded all expectations. Using the centuries old idea of leading an ass with a carrot, a self-contained gravity source is created ahead of the ship, thus drawing itself towards an unreachable point.

The “better” portion of the Better-Than-Light Drive stems from the effect the intense gravity has on space-time near the ship. As gravity becomes greater, so too does the “warping” of space-time around the gravity mass. Imagine a throw rug 10M long, and you wish to walk as far down that rug as you can using the least amount of effort. By grabbing the rug and bunching it up, you can step over the folds in the rug and arrive at the very end in one stride. The BTL Drive does the same thing with space-time. Not only does it have actual forward motion, but it also compresses space and time allowing travel over galactic distances with little expense. (1)

With the intense gravity fields created and experienced by the craft, new technology had to be developed for safe BTL travel–not only for our ships, but the valuable crew and passengers therein contained.

The hull of the ship, and many of the structural components, are created from a space age material called Polyaluminite (2). It is a solid and workable compound with liquid qualities that help it withstand the rigors of excessive gravitational pull. For an example, we turn to the simplest child’s toy–a rubber ball. The ball can be squished, pulled, bent and smashed, yet it retains it’s original shape. Our ships are not “rubber balls” by any means, and are certainly not “gravity proof”. The compound merely inhibits internal ship systems from being torn from the hull during times of extreme gravitational force.

To keep the ship intact through these extremes, the Polyaluminite hull must be further protected from the physical certainties of gravity. In 2021, retroactive (3) SpaceCorp researcher Kent Bendall developed an electric field, which created intense sub-atomic bonds in certain substances. Through his testing he noticed that even the most liquid of polymers, when subjected to this field, were unbreakable even when pulled to a molecule-thick strand.

This same field surges throughout the ship’s hull and support structure, ensuring safe passage of our technology into the future and into history.

(1) The BTL Drive can generate infinite mass if allowed to do so, however this would not be beneficial to space-time in and around the vessel. Safeguards ensure that the gravity created never exceeds the Chandreskar Limit.

(3) as per the Technology and Science Intellectual Property Act of 2011.

To travel faster than light is not a simple undertaking. Although the polyaluminite hull of the ship is indeed capable of protecting the ship during standard space-travel, it is only matter, and cannot protect the ship from the extreme conditions of faster-than-light travel. The distortion of space-time, and the huge gravitational force created by the BTL Drive is enough to reduce the ship and its crew into a pile of atoms. One must always remember the fundamental law that it is impossible for anything in the universe, whether it is matter or energy, to travel faster than 299,792,458 meters per second.

In order to overcome all of the obstacles that go along with better-than-light travel, the Bendall field generator was developed for the ship in 2021 by physicists Cornelius F. Ashton and (posthumously) Kent Bendall. A Bendall field consists of controlled electrical energy, which has the ability to flow through matter and render it impenetrable by all forms of matter and energy. The electrical energy created by the field in the ship fuses the atomic bonds in the polyaluminite hull, making it impervious to any sort of extreme physical conditions the ship might encounter. Heat and radiation cannot penetrate the field, nor can large objects.

The Bendall field is so strong that it protects the ship and its contents from the effects of space-time outside of the ship. Once the ship is protected by the forces of normal space-time, and hence the forces of the universe itself, the speed of light barrier is effectively removed from any matter inside the field. The field would allow time and space to continue normally inside the ship, protecting the contents from distortions associated with near-light travel. To the inhabitants of the ship, time would flow as it always had.

The Bendall field is indeed the key element in making the use of the Better-Than-Light drive possible. It bends the rules of physics, in turn allowing the BTL to bend space.

Tweets by GreenRoninPub
Scroll to top Skip to content