What is AGE, the Adventure Game Engine? 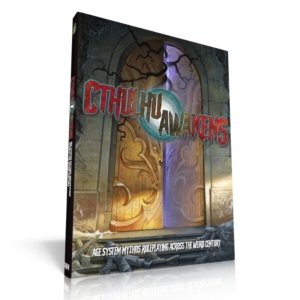 From its beginnings as the system used for Dragon Age, the AGE system has evolved, with multiple variations, but they all use the same basic system.

The following sections explain the basics of AGE, but you can also get a great breakdown of how it works by watching this video of Wil Wheaton explaining AGE for Titansgrave: Ashes of Valkana viewers.

No matter the game, AGE’s core mechanic remains the same.

There are a few variations on this game system, used for special situations, but they all involve versions of this process, called making or rolling a test.

Example—Dashing Up a Rope: Let’s say your character is running from angry guards because you’re somewhere they don’t think you’re supposed to be. Fortunately, you left a rope you climbed down, and can use it to escape—but you must do it fast enough to outrun the club-swinging guards behind you! The Game Master asks you to make a TN 15 Strength (Climbing) test. This means:

Stunts and a Special Die in the Adventure Game Engine

One of AGE’s distinctive features is the use of stunts: bonus benefits and special moves you can take by spending a special resource called stunt points, or SP. One way of gaining and using stunt points common to all AGE games is the following:

If you succeed and roll “doubles,” where any two of your three dice (this may or may not include your special die) have the same number on their face (double 1s, double 6es, and any matches between), you gain stunt points equal to the number on your special die.

You spend stunt points on stunts, selected from a table according to what you were doing or the situation you were in. So, if you rolled doubles successfully hitting an enemy with a sword and your 3d6 came 4, 5, and a special die of 4, you’d gain 4 SP to spend on a combat stunts table, like the following:

In this situation, with 4 SP, you could do the following:

Stunts and previous game mechanics explanations have talked about your “special die.” Just to remind you:
You only need three six-sided dice (that is, ordinary cube dice), or 3d6, to make tests in the Adventure Game Engine, but one of your dice must be distinctive compared to the other two.
Some AGE games have special dice sets which take care of this for you (and look pretty stylish, honestly) but just adding a red die to two blue dice, or a bigger die to two smaller dice, is fine too!
This is the die you look at to see how well you do when you succeed, and to see how many stunt points you get when you roll doubles. But in AGE games, it isn’t just called the “special die”—its name depends on the game you’re playing:
No matter the name, the die works as described here.

Like the name of your special die, your AGE character may have game statistics with varied names, but the basic ideas and categories all work the same. Here’s what an AGE character is made of:

These are your basic characteristics, which apply to a wide variety of situations, like Strength and Intelligence. Most AGE games use 9 abilities—Dragon Age is an exception as it uses 6.

You can generate your abilities by spending points, or by rolling 3d6 on a special table. Starting AGE characters usually have ability ratings between -2 and 4. A rating above 5 is truly exceptional.

Thus, note that if you roll for your abilities, your ability score is NOT the 3d6 roll—it is only the table result. Also, the random ability generation table is already designed to make characters a bit more heroic than ordinary people, so there’s no need to roll an extra die and take the best 3 dice out of 4.

Did your character come from a wealthy or poor background? Do they know a trade? At some point, you’ll be asked to select a background for your character that answers these questions and provides game traits reflecting their experiences, such as an ability focus or talent degree.

In some AGE games, this step includes further options:

An ability focus (usually just called a focus) represents training and competence in something narrower than one of your abilities. Each ability has one or more focuses associated with it. As described in AGE’s Core Mechanic, an ability focus provides a +2 bonus to your roll in the area it covers. You gain focuses from your background and related factors, from advancing in level, and sometimes from a character class.

You gain certain special traits called talents, which enhance your competence in a certain area. For example, the Scouting talent in Fantasy AGE lets you re-roll tests using Dexterity and the Stealth focus. Each talent has three degrees which provide further benefits within their field. In some AGE games, even magic and psychic powers can be acquired as talents.

Some AGE games use a small number of character classes. For example, Fantasy AGE uses the Warrior, Rogue, Mage, and Envoy classes. These represent broad concentrations that provide increased abilities, more focuses and talents, and a few special class abilities, both immediately, and as you advance.

However, The Expanse Roleplaying Game and Modern AGE are both classless. You gain traits based on your character’s background and related elements and use simple rules to select their ability increases, new focuses, and new and improved talents as they gain experience.

Not all AGE games use classes, but all use levels. This doesn’t mean every game will vault your character to heroic status—some can be quite gritty—but level helps structure how your character improves without having to track “points” and other small measures. AGE games support advancement to Level 20.

AGE characters are similar across games—know one kind, and the others are easy to figure out—and they all have various secondary game traits. All AGE games use a Defense score, which is the target number of tests to attack the character. Some use a Health score, which goes down with damage, or a Fortune score, which can be spent to prevent injury. Armor, magical power…depending on the game you’ll see statistics for these, but no matter what they are they’re based on the simple core AGE system.

If you’ve read everything else, you know pretty much anything you need to start playing beyond a skim of whatever Adventure Game Engine rulebook you’re using. Once your character enters the story, they participate in scenes called encounters, which come in three types:

An encounter can have multiple types, though there are special rules for the various elements of each, such as combat for action encounters, or rules for influencing someone socially.

An adventure—or scenario, story, and so on—consists of multiple encounters across one or more game sessions. Beyond the basic categories, the Game Master and game determine what stories you play:

At that point, the rubber hits the road, and the dice clatter on the table. You’re ready to play a roleplaying game using the Adventure Game Engine.