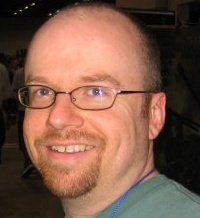 I’m Green Ronin’s IT Director (Secret game industry perk: make your own title!) and in-house editor. Unlike our game designers and developers, I hang out in the background, reacting to problems with our web sites or online orders, or jumping in to edit a manuscript when Chris or one of the line developers lets me know it’s ready. While they plan out a product line’s schedule months in advance, I’m not always sure what I’m going to be doing each week. Or each day.

If we had fancy things like employee numbers here at Green Ronin, mine would be 4. But then, if we had more than eleven employees, that number might be more impressive. How does one get a gig like mine? I’m glad to pretend you asked!

How to Get Started in the Game Industry Without Really Trying, or, The Importance of Bookmarks

Back in about 1994, I had a temp job in downtown Seattle as a file clerk at an Evil Law Firm. (Now defunct.) My friend and coworker Jesse happened to notice that I was using a Magic: The Gathering card as a bookmark (I’m pretty sure it was an Atog, and the book might have been something in Asimov’s Foundation or Niven’s Ringworld series), and we started talking about games. One thing led to another, and before you could say “fired for having too many rubber band fights in the file room” we and some friends and brothers had gone and founded Rubicon Games, Inc.

At Rubicon we had a great company name, a terrific logo, and a sort of vague idea that we should, you know, publish some games or something. We wrote a little collection of twenty dice games called The Die is Cast (see what we did there?) and a fun little card game called Up the Creek, and were still milling about with nothing actually published when the roleplaying game Everway fell off of the back of the WotC truck and landed in our company’s lap.

Okay, it wasn’t quite that simple. We had to ask for it first. When Wizards of the Coast declared that they were divesting themselves of their roleplaying game lines (this was prior to when they reversed course again and bought TSR), Pagan Publishing, Atlas Games, and Rubicon Games all submitted proposals to acquire Jonathan Tweet’s new card-based roleplaying game Everway. Atlas acquired Ars Magica and probably figured that was enough. Pagan Publishing was the clear frontrunner, but decided not to get Everway after all, probably because it was so completely different from their normal Lovecraftian fare. That left Rubicon, and somehow WotC decided to go ahead and send the game line our way instead of just tossing it out or using it to build an obstacle course in the parking lot of their huge office building. By submitting one proposal we went from having no actual products to having to rent space in two different warehouses to store pallet after pallet of boxed sets and art cards.

One important tidbit, to my own future at least, was that Nicole Lindroos had written an unpublished adventure for Everway. We found the manuscripts for that and another adventure on one of the CDs we got with the rest of the Everway stuff, and published them. I met Nicole, Chris Pramas, and wee Intern Kate when they stopped by my house in Seattle so Nicole could get some copies of her adventure. We were, of course, unaware that this was setting the stage for my future employment with the future company Green Ronin Publishing.

Rubicon was not the best publishing company, despite our great name and logo. We diversified into game retailing by merging with the Seattle-area game store chain Games & Gizmos, and I came on full time to create G&G’s online store. I also started gaming with Chris and Nicole, and ended up finally putting my English Lit degree to good use by editing Green Ronin’s first product, Ork! The Roleplaying Game. My mom was so proud.

Soon after that, I started freelancing on GreenRonin.com for Nicole, Chris, and Hal. Meanwhile, giddy with Dot-Com Era excitement, Games & Gizmos over-extended and had to start closing stores, and I moved on to do some contract work for the MSN Gaming Zone. From there I worked at Cranium on the kids’ game Hullabaloo
and also proofread the Swiss-German card set for the Cranium board game. No, I didn’t know the language. Through another contract gig, I proofread a set of Pokémon cards for Nintendo USA, although to my kids’ dismay I have no idea what set it was.

In about 2002 I became Green Ronin’s Employee #4, creating and managing our web sites and proofreading and editing books. I’ve edited books for the d20 System, Warhammer Fantasy Roleplay second edition, Mutants & Masterminds, A Song of Ice and Fire Roleplaying, and my personal favorite, Dragon Age RPG. Thanks to GR I’ve even seen my own card game, Walk the Plank, on at least two stores’ shelves, and have met literally ones of Walk the Plank fans from around the world. By which I mean Australia.

I’ve been able to live my own version of the dream gamer geek life, minus the great wealth part, and all because I used an Atog as a bookmark. That bookmark also led to me meeting my awesome wife, but that’s another story.