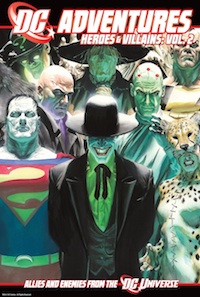 Chris Pramas, our fearless leader here at Green Ronin, wrote an excellent primer on licensing a few weeks ago. He covered the business side of things and hit most of the high points. This time, I’m here to dig in a little deeper and talk about dealing with a license from a "big, traditional" licensor; namely, DC Comics.

I don’t want you all to think I’m jaded and only in the game design biz for the fat wads of Benjamins I make, so let me say right now that it is as unbelievably cool to be working on DC Adventures for me as it would be for you! I’ve been a comic reader for two years longer (32 years) than I’ve been a gamer (30 years), so comics are in my blood. My college years are a blur of nights and weekends playing Champions and our own home-brew superhero game using hacked Cyberpunk rules. So, yes, I’m really enjoying the DC license.

Anyway, how does one handle a license with a giant company like Warner Bros.? The answer is surprisingly simple.

First, I try to be professional. Chris discussed this in the Round Table I linked to above and it’s true. The people who work at DC and WB are doing a job. They appreciate enthusiasm, because they know they’ll get a good product out of a licensee if they’re excited about it, but what they really want is someone they can discuss things with rationally, who understands the business, and who they can rely on to produce a game (or any sort of product) that appeals to the fans and looks good in final form. Another key thing I try to remember is the game is only one of many products the people at DC are working on at that moment. They could have a dozen or more projects to deal with right alongside mine, so if they know Green Ronin is able to handle our end of the deal it makes their job easier because they don’t need to do any hand-holding.

Second, everyone at Green Ronin tries to be persistent without being annoying. Because big companies have a lot of things going on we take it on ourselves to be the ones sending reminder emails about getting text approved, gaining access to art files, requesting help from the editorial side to make sure a character is represented correctly, etc. Some people feel like it’s pestering to send a, "Did you get a chance to check on X" email, but really, those emails are appreciated because they’re reminders of things that may have been forgotten. Persistence is fine because it tells the licensor that we care and are trying to make the product as good as possible.

Third, this is with regards to the work we do on guts of the DC Adventures books… we treat it like we would any other book or game. We’ve done the hard part by acquiring the license, now we have to get to work doing what we do. In my case that’s contracting writers to produce two-hundred-and-some thousand words about 500+ different DC comics heroes and villains. I send out the contracts, find out the writers’ preferences for who they’d like to work on, split up the characters with those preferences in mind, and give the writers a deadline. Just like I do with every other book. Follow up later on, nearer to the deadline, to see how everyone’s doing and see if extra time is needed or if one writer can pick up another writer’s slack. Just like with every other book. When all the raw text comes in, compile it, edit it, and make sure the characters are correct. Just like… you get the idea.

Just because I’m dealing with a license doesn’t mean I do anything different. The process is the process. The only differences are in the beginning and at the end with contracts and approvals.

Fourth, I try to keep in mind that I’m dealing with someone else’s intellectual property (or, IP, in the biz). That means I need to submit what we’ve created for review. When I’m prepping something to send in, I try to give my contact at the company a call and warn them. "Hey, I’m going to send you a 500 page document in a couple of weeks and I thought you might like a heads-up," goes a long way toward making that contact’s job easier—and when they can prepare to receive a giant document like that it likely means they can return it to me that much faster. Approvals can be a bit of a pain because they take time and we often end up reworking small or large sections of what we’ve submitted (whether it be text or graphic elements), but that’s what we’ve signed up for when we acquired the license. And ultimately, any changes the licensor asks for are because they want to make the final product better. So, we make the changes no matter how many long nights it takes.

Fifth, all throughout the process there’s a lot of back and forth. Every time I send an email or pick up the phone, I remember to try and improve the relationship between the two companies and the various people involved. Everything I can do to make the job of the person on the other end of the line’s job easier, the more he or she will be willing to do for me if and when I need it. A good partner in a business relationship is a great thing. I always try to be that person.

Lastly—and this applies throughout the entire relationship with the licensor—we meet our commitments. We’ve agreed to certain things both formally, in contracts, and informally, in phone calls or emails, so when I (or Hal or Chris) say we’re going to deliver on something; we do it. That goes for things like calling when we’ve set up a time to call, all the way up to sending royalty statements and payments when they’re due.

Licenses can be time-consuming and tricky, but I find them a pleasure when working with a good property and company. Marrying the heroes and villains of the DC Universe to the Mutants & Masterminds game system is a perfect fit… and the sum is definitely greater than the parts!