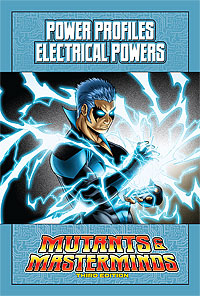 Whether you were born on February 29th, you think a lot about leaping tall buildings in a single bound, or you wish you could leap in Dragon Age, we might just have a deal for you! In celebration of today’s quadrennial event, we’ve placed three awesome products at five dollars off in our Green Ronin Online Store. For a limited time, you can get the Dragon Age RPG Set 1 boxed set, Mutants & Masterminds Gamemaster’s Guide, and/or the M&M GM’s Kit for $5 off! Happy Leap Day 2012!

And in other news… From the thunderbolts of the gods to the energy sustaining the modern world, electricity is a power to reckon with, and Electrical Powers range from hurling bolts of lightning or stunning taser blasts to absorbing and conducting the output of a city’s power-grid, or “riding the lightning” by transforming into electricity and traveling in the blink of an eye.