As summer convention season approaches, we in the game industry also find ourselves in the midst of "award season" where the previous year’s releases are judged, sometimes by a group of our peers, sometimes by jury, sometimes by no-holds-barred popularity contests open to anyone who has an opinion. I’ve been involved in game industry awards over the course of my career, including serving on the Origins Awards committee for several years (including serving briefly as Chairman) and I’ve seen how the sausage gets made, so to speak, but I still love and appreciate the awards efforts that take place in the hobby game industry, gristly bits and all.

Awards can be a contentious and passionate affair regardless of how the they are determined or what organization hands them out. Controversy and impassioned critique springs up around award nominees and winners; whether Nobel or Pulitzer, Origins or ENnies, it makes no difference when passionate people have strongly held opinions on their interests. In the wake of seemingly annual arguments over awards and their results I’ve seen people become disheartened and disinterested, cynical even, but I was reminded the other day why I still care and why, at least in the realm of the hobby game industry I think you should, too.

The ENnie awards ask nominees to submit a sound file or a song that they would like to play during the few seconds between when the award is announced and when the winner (should that be you) makes it up to the stage to accept the award. A few years ago I got my turn to pick something and I chose Pump It from the Black Eyed Peas, which just happened to be an upbeat song that I personally liked. As it turns out, songs that get right to the groove within the first few seconds are rarer than you might think but Pump It started off with a blazing sample from Dick Dale’s Misirlou and fit what we needed to my satisfaction. That year we were honored with several nominations in the ENnies and the whole company turned out for the ceremony to see if we’d make it past the final cut.

As it happens that year at the ENnies was rather a high point for Green Ronin and to our genuine surprise we were honored with several silver and gold medals. It was an emotional night for many reasons, not the least of which because the company had been hit hard by the catastrophic failure of a key business partner that lost our little company (and many others) a staggering amount of money (search "Osseum debacle" if you’re curious). Some of the books up for honors that night were things we’d released to critical acclaim and then never seen a penny from sales. We’d had a very real fear that the company wouldn’t survive at all, let alone be attending Gen Con and reaping awards. That night things went our way and time after time as the award was announced and our "theme song" began to play, the gathered crowd started clapping along *clapclap* *clap* *clapclap* *clap* as our people made their way to the stage. That night wasn’t about "winning" and was NEVER about "beating" our esteemed competition but was all about validation (in spite of our troubles, we’d reached people with our products), inspiration (people were essentially asking us to keep doing what we were doing), and, most movingly for me, camaraderie (fans and colleagues alike were happy for us, were cheering with us, were clapping along and singing our song and the message was loud and clear that we were all in it together). At that moment nobody gave a whit about how the awards were calculated or whether there was sufficient evidence that a body of unholy neutrality had empirically calculated the page density per dollar value of each nominated product or whatever the annual complaints about the process might have been. That night the ballroom resounded with a crowd of people cheering and clapping along, enjoying our surprise and glee, gracious and giving and celebratory.

I realize I’m beginning to sound like Sally Field ("…I can’t deny the fact that you like me, right now, you like me!") but bear with me. That night at the ENnie Awards has become one of my cherished memories. Although Green Ronin as a company was still pretty young, everyone in the company (and several of our most valued freelancers) had been working in the industry for many years. For some of us it was the first time in more than a decade of work or more that we’d experienced that kind of reception. To this day I can’t hear that song without breaking into a huge, nostalgic grin. I’ve had many other similar nights since, though few of them have involved Green Ronin. In the years since our awards blow-out experience we’ve had the pleasure to see numerous other colleagues share our experience from center stage. I clapped my hands sore for our friends at Paizo one recent year and watched our colleagues at Evil Hat accept some well-deserved awards brimming over with goodwill because I remember how I felt and I’m so pleased they’re getting a chance, too. Creators of websites I’ve never visited, designers of games I’ve never played (and sometimes would never play), podcasts I’ve never listened to, I just can’t help myself but be happy for everyone who gets a moment of recognition for the hard work, dreams, and inspiration they’ve poured into whatever it is they’ve done. In a job where it’s much more likely that you’ll hear from someone who can’t believe you’ve "screwed up" Superman’s stats or some such, a little positive feedback goes a long way. I can’t bring myself to be stingy when it comes to these fleeting awards. I hope you’ll join me in resisting the cynicism that can surround awards and join hobby game fans in offering a few kudos to your favorite game companies, designers, and systems this awards season. Want powers that have some impact? Kinetic Powers have a lot of impact, enough to blast through steel and stone, and they can take a lot of impact, too, blocking bullets, blasts, and explosions. From telekinesis to projected force field and kinetic blasts, the powers in this profile can put things into motion or stop them in their tracks. For M&M Third Edition.

A Game of Thrones Edition of A Song of Ice and Fire Roleplaying will be appearing in stores later this week. If you want to take advantage of our pre-order special, in which you get the PDF for only $5 with purchase of the physical book, you have until Friday to place your order. If you want to know more about A Game of Thrones Edition, check out this lengthy review by Pookie. He really delves into the system and uses examples to show you how it all works. 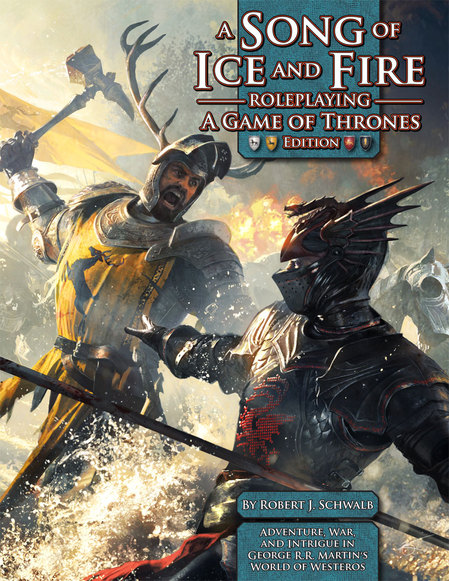 The Ronin Roundtables have concentrated on the business side of things a lot since we launched, but now that we’re a couple of months in, let’s have some fun! Steve Kenson talked about how he was introduced to gaming last week and that got me to thinking about the games I’m currently running or playing, so I’m going to tackle that important subject this week!

END_OF_DOCUMENT_TOKEN_TO_BE_REPLACED Paladins and priests, shamans and monks, the pious and
the revered from virtually any faith you can imagine, they
all gain new options and potency in your AGE-powered
campaign when you add in this product’s centerpiece: the
Divine Gift talent. Whether your character is a devotee of Love or War, a
practitioner of Law or Chaos, or a servant of Fate, this
kit offers ways to demonstrate the power of her faith. AGE (Adventure Game Engine) products are fully compatible with the Dragon Age RPG.

AGE Explorations: Gifts of the Gods From the unleashed power of a hurricane wind or destructive tornado to drawing the breath from your target’s lungs, Air Powers command the life-giving atmosphere all around us. Whip up wind blasts and shields to protect you from attack. Fly on the wings of the wind, and let it carry your words across great distances as you snuff out fires and the consciousness of your foes just as easily. For M&M Third Edition.

My first experience with mutants in an RPG wasn’t a superhero game (except by the broadest possible stretch of the term). No, my first gaming mutants were the inhabitants of the ruins of TSR’s Gamma World. I happened upon the grey boxed set of the first edition of the game in a local Hallmark store (of all places) when I was in middle school. Fascinated by the cover illustration of explorers at an ancient ruin and the map on the back of post-Apocalypse North America, I was hooked. I was already a fan of post-apocalyptic novels like Andre Norton’s Star Man’s Son and Sterling Lainer’s Hiero’s Journey, so I grasped the concepts of Gamma World right off. The intro text about the Apocalypse (the mysterious organization that brought about the end of the world) sent chills down my pre-teen spine: "We have the power… the choice is yours!"

END_OF_DOCUMENT_TOKEN_TO_BE_REPLACED There is more to these powers than meets the eye. Who needs control over forces or matter when you can control perception itself? With Illusion Powers, make yourself unseen and unheard, or create a false image for your foes to waste their attacks upon. Twist the environment to appear any way that you want, and allow your foes to defeat themselves once they can no longer trust what they see, hear, or feel. Nothing is what it seems with the power of illusion! For M&M Third Edition.

I’m Green Ronin’s Director of Electronic Publishing. That’s a resume-inflating way of saying I deal with PDFs. I came to Green Ronin in 2004 by way of The Game Mechanics (where I was part owner and jack-of-all-trades) and Wizards of the Coast (where I started in customer service and ended up managing the company’s Web site). When I’m not working on Green Ronin’s books, I’m a grad student at the University of Washington. Or slacking. I’m a big fan of slacking.

I want to share some of our thinking about how and why we make PDFs, so I volunteered to take a seat at the Ronin Roundtable and forsake my slacking and studying.

END_OF_DOCUMENT_TOKEN_TO_BE_REPLACED Tomb of the Seeress is the first of the Battle & Loot PDF series. It is built around the resting place of an ancient sphinx slain by mighty heroes in ages past. Tomb of the Seeress includes three new monsters, associated treasure tables, and new magic items and rewards. Perfect for your AGE fantasy campaign! AGE (Adventure Game Engine) products are fully compatible with the Dragon Age RPG.