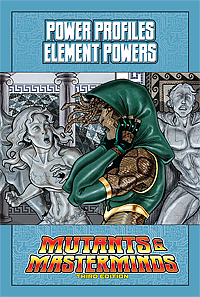 Element Powers looks at the powers of the elements. Not earth, air, fire, and water, but argon, copper, radium, chlorine, mercury, hydrogen, and more. From taking on an element’s power to transmuting the elements at will, the unleashed abilities of the periodic table are yours to command!