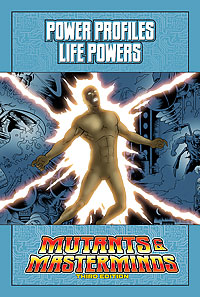 "It’s alive!" Life Powers grant influence over the essential stuff of life itself: not just biological systems, but also the mysterious, vital "life force" differentiating the animate and inanimate. Users of these powers can heal—perhaps even restore life to the dead—but also harm, literally holding the powers of life in their hands! For M&M Third Edition.