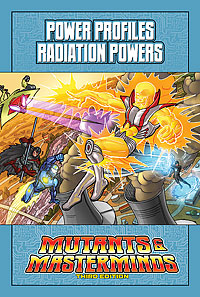 "There’s something different about you… You’re positively glowing!" Command the unleashed power of the atom! In the modern age, no powers are associated more with changing ordinary people into superhumans than Radiation Powers. The "radiation accident" is a time-honored origin, and radioactivity offers a powerful weapon and tool for those able to wield it. From radiation blasts to blinding light and burning heat, radiation powers let you nuke ’em until they glow! For M&M Third Edition.