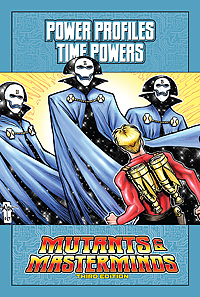 Good news! We’ve gone back to last week and circumvented certain technical difficulties and our PDF guru’s trip to Hawaii to post the Time Powers Power Profile! But in case you missed it…

Time is literally "on your side"! Time Powers can speed up or slow down the flow of time, reveal the future or the past, allow one to "sidestep" into parallel time-lines, and even stop time altogether or change history! For M&M Third Edition.