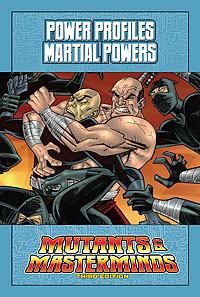 En garde! Martial Powers focus on the fighting styles and techniques that give masterful combatants an edge against even super-powered foes, from the attacks of sword-fighters and kung fu masters, to the mysterious powers of the ninja, martial powers ensure you won’t go out without a fight! For M&M Third Edition.