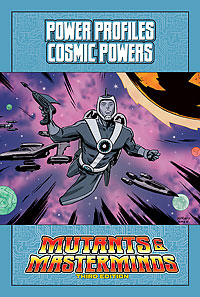 There are powers beyond life on Earth. Cosmic Powers deal with the vastness of the universe and the fundamental forces driving it. Soar amongst the stars and draw upon the fabric of the cosmos with powers that can protect the universe, or shake it to its foundations. For M&M Third Edition.