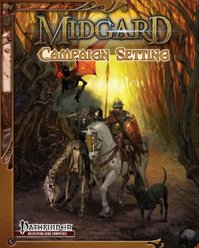 The release of the Midgard Campaign Setting by Kobold Press brings a major expansion of the AGE System: 26 new backgrounds, 3 new schools of magic, and many new specialties from the dark fantasy world of Midgard.

Read on for the highlights of this new book by Wolfgang Baur, Jeff Grubb, and Brandon Hodge, along with links to download two 2-page spreads, straight from the interior of this gorgeous color book!

There are 26 new backgrounds to choose from, and here are the Top 12 as voted on by…well, nobody. We just thought they were especially cool.

Not enough? The other new backgrounds include lightfingered kobolds, centaurs of the steppes, diabolical gnomes, scholars of ancient days, outcast trollkin, and more.

Arcane Adept, the Artificer, the Scrivener, and the Star Mage are all Arcane specialists of one kind or another, and their names tell you much of what you need to know: whether they’re building constructs, deciphering the mysteries of ink magic or calling upon the magic of stars and shadows.

The Harem Assassin is a charming rogue, the Shapeshifting Berserker is a skin-changer out of Norse myths and history, and the Spymaster is exactly the duplicitious master of deceit you would expect. Lots of new options here for advanced characters!

As you might deduce from the descriptions above, the new schools of magic for AGE are Shadow Magic, Clockwork Magic, and Ink Magic. Each is unique and brings new powers and new options to your game. Do check them out!

As promised, you can take a peek inside the Midgard Campaign Setting book by downloading these two PDF previews:

You can find the Midgard Campaign Setting in PDF, hardcover, and softcover at better game stores everywhere. Expand your Dragon Age boxes across the shadow roads and into Midgard!