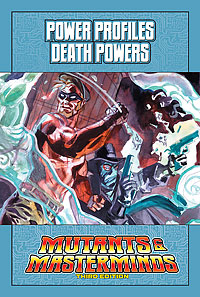 Perhaps the most feared—and most sought—power is over death itself, the ability to inflict it at will, and the power to hold it at bay in one form or another. Death powers do all this and more. Although often associated with evil, many of these powers can be used for good, and those gifted—or burdened—with them can choose whether to serve death or seek to master it. For M&M Third Edition.