We’ve been doing great at knocking down stretch goal after stretch goal. The essays, updated characters, and dust jacket have all been unlocked, so woot for that and thanks! Hal Mangold has done a mock up of what the dust jacket and leatherette cover will look like: 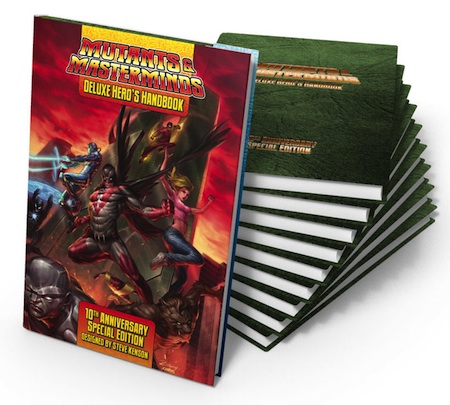 We’ve now moved into the final five days of the Kickstarter and we’ve still got some great stretch goals ahead. We’d love to see the new adventures for Emerald City and Freedom City (as would our eager authors, Seth Johnson and Christopher McGlothlin!).

We’re doing a final push for backers this week. We could love to hit that $40,000 mark and you can help! I’ve attached a web ad that you can feel free to put anywhere you like, with a link leading back to the front page of the Kickstarter. We’d also appreciate your links from social media. There are a lot of M&M fans out there and we want to reach them all. Thanks again to all the backers. You folks are awesome!