As I write this, the Mutants & Masterminds Tenth Anniversary Kickstarter has passed $25,000 in funding and a stretch goal I’ve been looking forward to: an opportunity to revisit some beloved characters from previous editions of the game and update them to the current (third) edition game stats! Now the big question is: which characters? 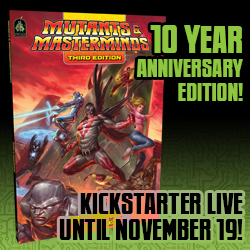 After all, M&M has featured literally hundreds of different characters over the past ten years, from the Meta-4 heroes and villains of the first edition rulebook and the Crooks! sourcebook to the numerous Freedom City characters from the first edition of the Freedom City book onward (and in sourcebooks from Hero High to Worlds of Freedom). Even the diverse range of characters in the Paragons setting sourcebook add to the ranks of M&M icons in the game’s history.

While I’d like to include a range of characters, and ensure the most popular fan requests are honored, there’s also limited space to include updated write-ups, and limited time in which to do them (alongside our other stretch goals like adding essays to the book about the game’s history, and perhaps even some new adventures). I tend to be inclined towards updating villains, since I think they’re some of the most useful characters for Gamemasters, but I’m not opposed to including some heroes, too. Of course, when you start talking about hero or villain teams, it gets problematic, since covering one team can easily takes up most of the pages for characters!

Since I’ve got the soapbox of the Round Table to work with, let me tell you about some of the past M&M characters I’d like to see included in the anniversary edition:

Those are some of my picks, but who would you like to see? Click on over to the Atomic Think Tank forum or to the Kickstarter page and let us know. Speaking of which, if you haven’t kicked in for the Anniversary Edition yet, why not take a look and help us to make it the best M&M rulebook yet? Here’s to another ten years!