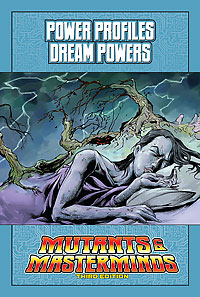 "To sleep, perchance to dream…" Dreams have been omens and harbingers throughout history and power over dreams means near-omnipotence in that misty nighttime world of sleep and imagination. Dream Powers range from crafting cunning illusions to nightmares able to traumatize, or even kill. For M&M Third Edition.