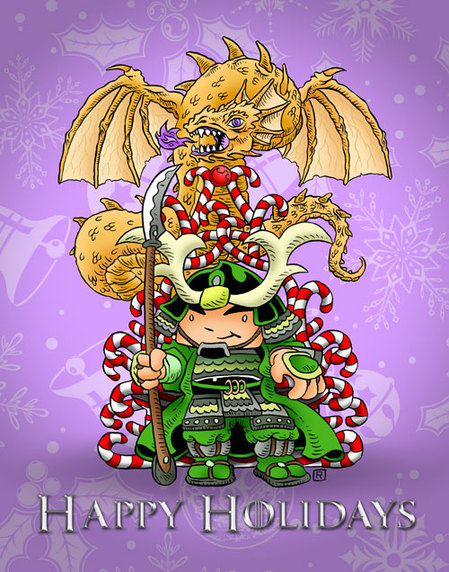 Welcome to 2013, everyone! As is traditional each January, I’m going to talk about the state of Green Ronin and what we have planned for the coming year. We ended 2012 on a high note, with the release of the long-awaited Night’s Watch sourcebook for A Song of Ice and Fire Roleplaying. We’re kicking off 2013 with the release of The Supernatural Handbook for Mutants & Masterminds, which should be in stores by January 16. These are great books and good omens of what’s to come!

This month we’ve also got two new staff people coming onboard. Pauline Benney is joining us as Art Director. Pauline was an AD at White Wolf for 8 years and certainly knows her stuff. She handled The Supernatural Handbook in a freelance capacity and we were so happy with the result that we hired her. Our other new hire is Jack Norris, who is our new Dragon Age/AGE line developer. Jack has been freelancing for us for several years (most notably on the DC Adventures line), as well as working for other companies (Margaret Weis Productions, White Wolf, Vigilance Press) on games like Marvel Heroic Roleplaying and Exalted. He’s a big fan of the Dragon Age world and video games so should fit right in as developer. Will Hindmarch, our previous developer, is leaving the company to pursue his own projects and we wish him the best.

Now let’s take a look at what we’ve got planned for our game lines in the coming year.

The coolest Dragon Age news is that the game is going to be featured on Wil Wheaton’s Tabletop show. About a year ago, I flew down to LA and ran a game for Wil, Chris Hardwick (The Nerdist), Kevin Sussman (Stuart the comic shop owner on Big Bang Theory), and Sam Witwer (Aidan on Being Human and Crashdown on Battlestar Galactica). It was a huge amount of fun and it should be a great intro to Dragon Age and the Adventure Game Engine that powers it. The session has been split into two episodes. The first debuts on January 31 and the second on February 14. Mark your calendars!

The big question on everyone’s mind with Dragon Age is, of course, Set 3. I would love to tell you an exact date that we will release it but I can’t just yet. I can tell you this. Art is pouring in and it looks awesome. We’ve been sending files up to BioWare for several months and the approvals process is ongoing. Will and I have been adding some extra material to flesh a few things out. With the nature of approvals and the transition between Will and our new developer Jack, my best estimate right now is a PDF release in February (which would be great timing with the Tabletop shows) and the boxed set in April. We’ll then follow that up with the adventure anthology The Deep Roads in the summertime, with further plans to be announced later this year.

Meanwhile, we’ve been working on a new game that uses the Adventure Game Engine. We’ll be making a formal announcement in a few months. For now I can tell you that it is a fantasy game and that we’ve created a brand new world for it that we plan to explore in a variety of ways. It is neither a vanilla setting with the de rigueur dwarves, elves, and orcs, nor something totally out there that’d require players to do homework to understand it. We think you’re going to love it.

Mutants & Masterminds is, as I mentioned, kicking off our year with The Supernatural Handbook. Next after that is the fourth and final book in the DC Adventures line, Universe. This is in layout now. Once we get all the art from DC and run the finished product through Warner Brothers, we’ll put the PDF up for sale and start the pre-order on the printed book.

After that we’ve got the Deluxe Hero’s Handbook, including the 10 Year Anniversary Edition that was the subject of our first (and highly successful) Kickstarter. The regular edition of the Deluxe Hero’s Handbook is a hardback core rulebook with about 64 pages of new material. We’ll be printing that and the 10 Year Anniversary Edition (which is an even fancier version with more extra material) at the same time.

Then at long last the mighty Emerald City will be released. This was originally planned as a simple book but over time it’s morphed into a much more ambitious project. Emerald City will now be a slip case with three books and a poster map. One of the books is a full length adventure (Emerald City Knights), so you can get a game going right out the gate.

Later in the year we have two more print projects. The first is The Cosmic Handbook. That’s right, after years of talking about it, we’re finally going cosmic! This will be a great resource for those who want to have superhero adventures in the depths of space and beyond. The second book is Power Profiles, which collects Steve Kenson’s popular series of PDFs from last year into a single volume.

Speaking of PDFs, we’ve got two new series coming to you this year. We’re happy to announce the return of Wild Cards to M&M with SCARE Sheets! This series will be similar in format to the Threat Reports, but feature characters from the most recent Wild Cards books (Inside Straight, Busted Flush, Suicide Kings, and Fort Freak). SCARE Sheets include character backgrounds by series author John Jos. Miller and game stats by our own Steve Kenson. The prolific Mr. Kenson is also behind the second new series, Gadget Guides. This will be similar to Power Profiles, but with wonderful, wonderful toys!

Last year we released revised versions of our two main books, “A Game of Thrones Edition” of the core rulebook and Campaign Guide. About a month ago we released Night’s Watch, which lets you play chronicles as members of that order or as Wildlings. The next thing we have planned is a boxed starter set. As you’ve surely noticed, the Game of Thrones TV show is a huge hit and we want to make a great intro to our game for beginners. Later in the year we have a full length adventure (or “adventure path” if you prefer) coming down the pike. We want to give SIFRP players something they can really sink their teeth into and this should more than do the job.

This year we also plan to launch our series of Chronicle System PDFs. These expand the game rules of SIFRP but are not set in Westeros. These are bigger than the M&M PDFs, so our plan is to do one per quarter. The first of these is Woodland Beasts, which adds some new critters for GMs. After that is Chronicle of Sorcery, which adds a spell-casting system to the rules for the first time.

Freeport: The City of Adventure

Freeport, as many of you know, was our first original setting at Green Ronin. It started in the d20 adventure Death in Freeport back in 2000 and over the years we’ve published many sourcebooks and adventures set there. The last couple of years, pickings have been thin for Freeport fans, as we’ve been concentrating on other game lines. In 2013 that’s going to change.

If you need some adventure material, our friends at Kobold Press will be releasing Dark Deeds in Freeport. This all new adventure is designed for use with Pathfinder but can be adapted fairly easily for other of our supported rule systems (True20, Savage Worlds, Castles & Crusades, d20 3.5, Pathfinder, and soon FATE).

We’re also working on another Freeport project behind the scenes, but that’s news for another day…

As you can see, we’ve got a lot planned for 2013 and we have a few surprises too. Here’s hoping this is a lucky year for us all. If you want to keep up with all the GR news, watch this website or follow us on Twitter and Facebook. I’ve also started a thread on our forums where I’ll be fielding questions. Stop on by if you have something you’d like to ask.

Have a great year, everyone. Let’s get out there and game!