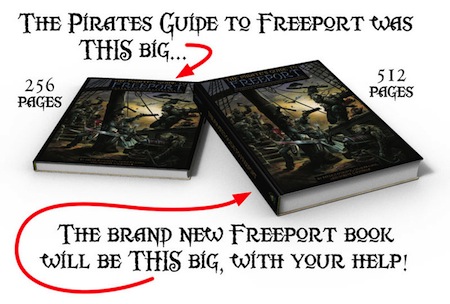 Just in case you didn’t see this graphic Hal put together for the Kickstarter page, there you go. A visual representation of just what kind of massive tome you’ll get if you pledge at the Scurvytown Special backer level or greater. ($80 or more.)

However, the real bonuses kick in at just $20 more, the Freeport Pirate backer level. For your $100 pledge you’ll get:

UPDATE:
And, we’re funded at $50,088! You guys are so awesome. Now, who’s up for helping us get that shiny new Wayne Reynolds cover?