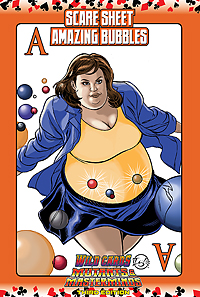 When it comes to the ace known as "The Amazing Bubbles," looks can be deceiving. For example, you wouldn’t know that she’s one of the most powerful aces in the world, or that she is actually a former supermodel before becoming a contestant on American Hero. Check out this SCARE Sheet and find out the other secrets of … The Amazing Bubbles! (For Mutants & Masterminds Third Edition.)