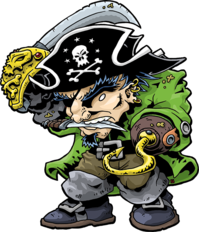 The Green Ronin team is happy to announce we’re launching our volunteer GM team, aka The Freebooter Program. We’re especially excited to offer this for our players, and we hope that many will step up to the challenge.

We believe there are many amazing Green Ronin games being run, and we believe our players would love to find more people to play them. The Freebooter Program is a great way to get more games in conventions and games stores. By joining the program, you’ll be able to share your favorite settings with brand new people, and help build a better community.

Many companies require you to partner with a particular store, but we’ve decided not to go that route. We want people in our program to run the games that fit in their schedule and locations. As example, in Seattle, we’re lucky enough to have game stores & cafes support each other. Many local players run games in pubs, coffee houses, and more. Want to run an open “Green Ronin RPG Day” at a coffee shop instead of a games store? We want to support that!

Of course, this doesn’t mean move your regular game to a coffee house to earn XP in our program. We hope that you’ll be setting up demos for new people! We also want to support players who wish to do both small and large conventions. We’re already planning on having quite a few volunteer run games at Gen Con. Heck; I’m running five Dragon Age RPG intro games at Gen Con! Obviously, you don’t have to run that many. We do want you to experience the whole show. That being said, we would like to give you XP rewards for a higher commitment. Yep, I said XP. That’s how we’ll calculate rewards. No ranks are involved; everyone is equally important.

It was also important for us to establish a Harassment Policy and standards of behavior while representing Green Ronin. We’re pretty clear about fostering an inclusive community, no matter where we go. This is why we require you to fill out an application to join. If you’re wearing a Freebooter T-shirt representing us at an event, we want you to feel comfortable. We also want people to feel comfortable when they are interacting with a Freebooter.

If you’re interested in knowing more of the program, or signing right up, you can read a quick overview here on our site. Once you’ve read that and want to join, you’ll head to the Freebooter Forum for the application and further information.

I’m extremely excited about this program. I’ve been a fan of Green Ronin and the staff, for far longer than I’ve been an employee. I believe in this company, the community, and the program.

Donna “Danicia” Prior is the Events Manager for Green Ronin Publishing. She is also the Executive Director of OrcaCon, the Inclusive Tabletop Games Convention in Everett, WA.

Donna is also a speaker at numerous conventions and conferences. She has spoken about building communities, diversity, harassment, and accessibility. She was a Gen Con Industry Insider for 2016. Donna is a gamer and a beer geek, often combining both hobbies while teaching new people to game and appreciate beer. She’s also insists she is NOT a Hobbit. You can follow Donna on Twitter: @_Danicia_. Find her also on http://about.me/Danicia.