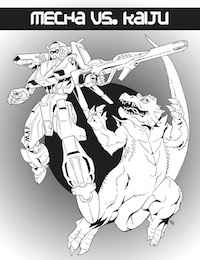 Last night I went to a midnight show of Pacific Rim with Ronins Nicole Lindroos, Marc Schmalz, and Intern Kate, along with Stan! of Super Genius Games and our pal Vinny. If you grew up on Godzilla and Gundam, you’re going to love this movie. We all had a blast and as gamers, our thoughts naturally turned to the age old question: how do you game that?

We just published a new Gadget Guide PDF this week called Mecha. If you are a Mutants & Masterminds fan, it’s a great place to start. There’s another way to game Pacific Rim farther back in our history though! In 2005 we ran a setting search for our True20 Adventure Roleplaying game. Other companies pitched us settings and the best four were included in the hardback core rulebook. Jonathan Wright and his company Big Finger Games pitched us a setting called Mecha vs. Kaiju. I remember opening up the pitch package and reading the title to Nicole. I said, "I think we have a contender!" because I immediately loved the concept. It was well executed too, so when we picked the four winners, Mecha vs. Kaiju was on the list. It was published in the 2006 edition of True20 Adventure Roleplaying.

When we were talking after the movie, Nicole suggested that we remind people about Mecha vs. Kaiju. Surely we weren’t the only ones who were going to think about gaming Pacific Rim or something like it in the wake of the movie. So we’ve decided to put the PDF of the 2006 edition of True20 on sale again for only $5. It also includes the settings Caliphate Nights by Paradigm Concepts, Lux Aeternum by BlackWyrm Games, and Borrowed Time by Golden Elm Media.

You should note that we later did a Revised Edition of the True20 core rulebook that replaced the setting search winners with the contents of the True20 Companion. It’s the original 2006 edition we’re putting on sale though.

If you already have True20 and you want some sweet giant robot vs. giant monster action, Big Finger Games later expanded out Mecha vs. Kaiju to a full sized book. You can find that here.

I think the reason Mecha vs. Kaiju grabbed me right away goes back to my childhood. When I was a kid, we had a black and white TV and cable was years away. One of the UHF channels in the Boston area was Channel 56 and they ran something called the Creature Double Feature each week. I saw a lot of Japanese monster movies despite the shitty reception we got. They ran kung fu movies too, so my later love of Hong Kong action cinema has roots there as well. In the early 80s, we first started seeing anime on American TV. I used to watch a show called Force Five, which was actually five different Japanese shows under one banner. Several of those featured giant robots and I was in. No surprise I ended up playing a lot of BattleTech in college.

So strap into your mecha, pick M&M or True20, and defend the Earth from giant monsters! Green Ronin super robot power…gooooooo!